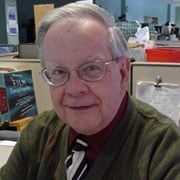 Tim Coakley has been designated a Jazz Hero by the Jazz Journalists Association. If you’re a fan of jazz, then you undoubtedly know Tim. And you also know that the honor is richly deserved.

Coakley always seems to be working on the Local 518 jazz scene, whether it’s behind the scenes or in the spotlight. You’ll often find him on the drum throne fueling his own Tim Coakley Trio or one of Skip Parson’s various traditional jazz combos. Or you might hear him on the radio; he’s been spinning jazz records for more than 25 years on WAMC-FM. You might also read some of Coakley’s jazz reviews in Schenectady’s Daily Gazette, where he works as a copy editor. Coakley also serves as president of A Place for Jazz, a volunteer organization that produces and presents the acclaimed jazz concert series at the Schenectady First Unitarian Society, as well as running various music education programs.

So, you can see that the Local 518 jazz scene would be a very different place without the many and varied contributions of Tim Coakley. Congrats on being named a true Jazz Hero, Tim!