If the Sex Pistols were the brutish louts of punk’s formative years – all spit, snarl and crude aggression – then you wouldn’t know it from the band’s surviving members, at least the ones who’ve played ‘round here lately.

Johnny Lydon, aka Rotten, did get his sneer on when his post-Pistols band Public Image Ltd played at Upstate Concert Hall last October, but PiL’s grinding death-disco was anything but unsophisticated.

And original (pre-Sid Vicious) Sex Pistols bassist Glen Matlock, during his acoustic show with the New York Dolls’ Sylvain Sylvain at The Linda in March, was more recognizable as the guy who formed the Rich Kids, a Midge Ure-fronted power-pop band, following his Pistols departure.

“We were growing our hair and had flowery shirts at the height of punk,” said Matlock onstage at The Linda. “Someone wrote that [the Rich Kids] looked like ‘ghosts of princes in towers.’ I thought that was a good line, and I wrote this.”

A fan in the half-full theater let out an audible “yeeaah” as Matlock launched into the signature Rich Kids tune, “Ghosts of Princes in Towers,” a satirical take on the not-so-tough New Wave “soft boys” of the Rich Kids and their ilk. It’s one of the best power-pop songs of the era, and it sounded especially spare and beautiful in acoustic form.

Matlock, admitting from the start that he’s near deaf, projected loudly during his set, which dipped into his 2010 solo album “Born Running” but also into his Sex Pistols past with a crowd-sing-along on “No Future” and a set-closer of “Pretty Vacant,” played like a stripped-down pub rocker but with plenty of anger intact. (Matlock is credited as the co-author of 10 songs on “Never Mind the Bollocks, Here’s the Sex Pistols.”)

Matlock’s tendency to emote forcefully made him a convincing acoustic performer, and his engaging onstage patter was all you could hope for from a guy with lots of rock and roll tales to tell.

The first time he came to Albany, he was with “a guy called Iggy Pop,” Matlock said before performing a sparse take on “Ambition,” a song Matlock wrote but Pop recorded for his “Soldier” album. (“I’m telling you, man, he didn’t do a very good version of it,” Matlock said.)

Calling Kinks frontman Ray Davies “England’s greatest songwriter,” Matlock talked about growing up in modest circumstances, in a crowded flat with no bathroom, where he heard the Kinks’ “Dead End Street” come on the radio when he was 10 or 11. “I really thought he had written this song for me,” Matlock said before encouraging the crowd to clap along to the Kinks anthem about being British and poor.

It was a good night all around for rock and roll memories, with New York Dolls guitarist Sylvain Sylvain replacing Matlock’s original tour-mate Tommy Ramone, who reportedly was ill.

Dressed in a punk rock beret, with a red bandana knotted around his neck, Sylvain Sylvain was a bit rusty at points, messing up early on during a poignant new song, “Leaving New York.” But it was the first night of the tour, and Sylvain more than made up for any blown notes and rough edges with lots of New Yawk charm.

“I would have brought my band but they fired me last week,” Sylvain quipped before telling a story about his early New York Dolls days, when the proto-punk band dressed up in high heels and Sylvain’s “mother’s lipstick” and went to see a Bo Diddley show, where they pestered the rhythm and blues legend with requests for his song “Pills” until the guitarist had them removed from the club because he thought they were asking for drugs.

“True fucking story,” Sylvain said before kicking out a beat onstage with his foot and getting alternate sides of the crowd to sing along to Diddley’s “Pills,” which also became a New York Dolls staple.

After closing his set with two more – “Lonely Planet Boy” and “Trash” – from the Doll’s influential debut album, Sylvain took a seat in the front row before joining Matlock onstage at the end of the night for a show-capper that grew increasingly inebriated and ramshackle but served up a blissful collaboration on the Doll’s classic, “Jet Boy.”

SECOND OPINIONS
Excerpt from Brian McElhiney’s review at The Daily Gazette: “For those only aware of Glen Matlock’s involvement in the Sex Pistols, Friday night at The Linda was a crash course in the rest of the songwriter’s career. The affable founding bassist of Britain’s most famous punk band tore through his back catalog before a crowd filling maybe half the venue, putting his songwriting skills on full display for an hour-plus acoustic set. Early on, Matlock stated he was going to treat the show like a wedding, playing ‘something old, something new, something borrowed and something bluesy,’ and that he did, sandwiching most of his 2010 album with his latest band the Philistines, Born Running, in between songs from his band after the Sex Pistols, the Rich Kids, a few covers and of course, a few Pistols classics for good measure.” 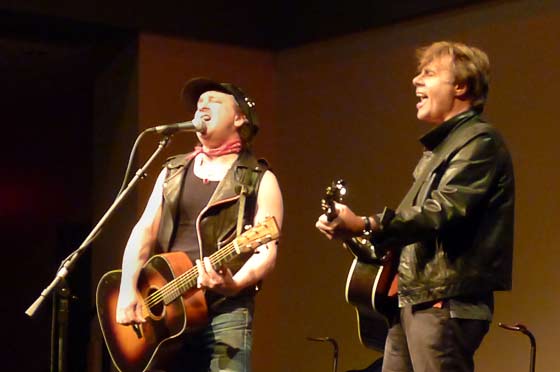 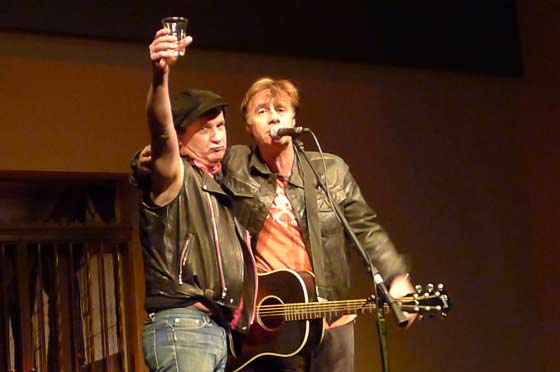 LIVE: “Sing in the Streets” Festival @ Caffe Lena (and…