By Sara Ayers On Apr 11, 2013
Share
Opening:
Swissted @ Arts Center of the Capital Region, Troy. Swissted is an ongoing project by graphic designer (and Troy native) Mike Joyce, owner of Stereotype Design in New York City. Drawing from his love of punk rock and Swiss modernism, two movements that have almost nothing to do with one another, Mike has redesigned vintage punk, hardcore, new wave, goth, grunge, and indie rock show flyers into International Typographic Style posters. Opens April 13. Reception + Book Signing: Thursday, April 18, 6:30-8:30pm (Through April 21)Photography Now 2013 @ Center for Photography at Woodstock. This years’ installment of the annual Photography Now exhibition presents eight artists who employ photography to put forth varied discourses within the documentary genre. Noah Addis, Alinka Echeverria, Ilona Szwarc and Samantha VanDoren look outwards into society, exploring timely or pertinent subjects ranging from forays into surreal subcultures to records of international movements and events. Beth Chucker, Ayala Gazit, Gary Grenell and Robin Schwartz each turn inwards with their work, training their eyes on conflicts and pleasures close to home. Opening reception: Saturday, April 13, 5-7pm (Through June 16)The Grand Design: Joseph Ramée’s Drawings for the Union College Campus @ Mandeville Gallery, Schenectady. The design of the Union College campus has evolved over the years, but its original design was conceived by Joseph Ramée in 1813, making this year the 200th anniversary of that design. The stamp of the Ramée design is still evident in building placement and landscape cultivation. This exhibition of facsimiles of 45 drawings is from a portfolio found by accident in the attic of Old Chapel by Professor Codman Hislop in 1932, “its cover green with age.” Opening reception: Tuesday, April 16, 5-6:30pm. (Through May 26)Bits and Pieces @ LARAC, Glens Falls. Featured Artists: Carey Conaway (mixed media); Diane Golden (assemblage); Gammy Miller (mixed media); Rebecca Mushtare (mixed media / installation). Opening Reception: Friday, April 12th, 5-7pm (Through May 10)Jeff Jacobson: The Last Roll @ Center for Photography at Woodstock. Works by Jeff Jacobson in the wake of his diagnosis with Lymphoma a few days before Christmas of 2004 and the subsequent announcement of the elimination of his beloved film Kodachrome – the tool which shaped his artistic vision over the course of his career in photography – by its manufacturer, Kodak. Opening reception: Saturday, April 13, 5-7pm. Artist presentation and book signing: Saturday, May 4, 3-5pm. (Through June 16) 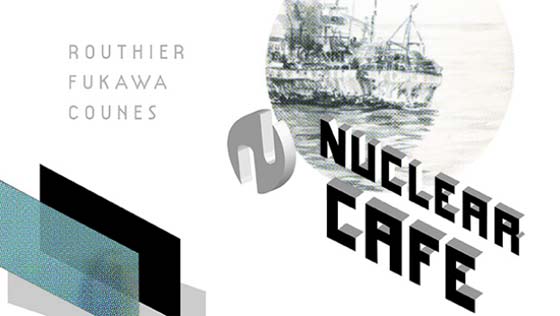 Nature Magnified: Photographs by Andreas Feininger @ Berkshire Museum, Pittsfield. Photographer Andreas Feininger, most well-known for his depictions of the city of New York, also excelled at capturing the intricate details of nature. A series of shell images are paired with actual shells from the Museum’s expansive natural science collection. (Through June 2)

Painting Between The Lines @ Williams College Museum of Art, Williamstown. Fourteen contemporary painters created newly commissioned paintings based on descriptions of paintings in historical and contemporary novels by authors such as Marcel Proust, Samuel Beckett, Sylvia Plath and Milan Kundera. By examining the ways contemporary artists look at storytelling, literature and writing as expressions of individual thought, the show aims to looks at the state of contemporary painting today, presenting some of its most innovative practitioners such as Laylah Ali, Marcel Dzama, and Fred Tomaselli. (Through June 9)The Legacy of Currier & Ives: Shaping the American Spirit @ Albany Institute of History & Art. An exhibition featuring sixty-four hand-colored lithographs that pays tribute to the popular nineteenth-century printmakers and their role in establishing a form of mass media that was inexpensive and eagerly sought by ordinary people. (Through June 15)Labeltalk 2013: India @ Williams College Museum of Art, Williamstown. The ninth exhibition in the Labeltalk series, exhibitions that aim to explore works of art from a broad range of perspective, this show focuses on Indian art, inviting Williams professors from a broad range of disciplines to write short responses to the works. Also on view: Teaching with Art: The Persian Image, an array of Persian paintings dating from the 15th to the 20th century. (Through June 30)Someday is Now: The Art of Corita Kent @ The Tang Teaching Museum and Gallery, Saratoga Springs. A major retrospective of graphic artist, activist and educator Corita Kent including iconic images from the turbulent 1960s and 70s. (Through July 28)Points of Connection: Generations of Mingei @ The Harrison Gallery, Williamstown. In 1918, the British potter Bernard Leach visited Japan where he met a young, then unknown now legendary, potter Shoji Hamada in the small village of Mashiko. This friendship sparked the resurgence of the mingei aesthetic, from which sprung the life force of modern Japanese ceramics. Mingei, the “art of the people,” aspires to celebrate beauty in the functional.

Shoji Hamada, one of Japan’s National Living Treasures, mentored Tatsuzo Shimaoka, also a National Living Treasure, who in turn mentored Ken Matsuzaki. Shinsaku Hamada, son of Shoji, continued the tradition, passing it along to his son, Tomoo Hamada, who, along with Yoshinori Hagiwara, represent the contemporary work in this lineage. Inspired by Bernard Leach, Phil Rogers carries on the legacy in Great Britian. (Through July)

Xu Bing: Phoenix @ MASS MoCA, North Adams. Drawing inspiration from the contemporary realities of his fast-changing country, Chinese artist Xu Bing spent two years creating his newest work, featuring two monumental birds fabricated entirely from materials harvested from construction sites in urban China, including demolition debris, steel beams, tools, and remnants of the daily lives of migrant laborers. At once fierce and strangely beautiful, the mythic Phoenixes bear witness to the complex interconnection between labor, history, commercial development, and the rapid accumulation of wealth in today’s China.Objectify: A Look Into the Permanent Collection @ Berkshire Museum, Pittsfield. A major new exhibition of some of the most significant and fascinating objects from the Museum’s holdings of more than 50,000 artworks, specimens, and artifacts. Opening reception: Friday, April 5, 5:30-7:30pm. (Through September 1)

Clark Remix @ The Clark, Williamstown. A salon-style installation of works from The Clark’s permanent collection, including some 80 paintings, 20 sculptures and 300 examples of decorative arts. Visitors will be able to create their own “curatorial remix” of the collection through an interactive project called uCurate, available in the gallery and on the Clark’s website and can then submit them to a gallery that will be featured at clarkart.edu. The Clark’s curatorial team will regularly review the submissions, and will select the best of these for exhibitions that will be presented at the Clark. (Through Jan. 1, 2014)
Share