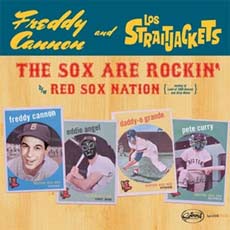 While we’re all thinking about Boston…

A few years ago, Nashville’s masked twangmasters Los Straitjackets teamed up with ’60s hitmaker Freddy “Boom Boom” Cannon to do some recording, and now we’re about to hear the results.

In conjunction with Record Store Day (Saturday, April 20), the collaboration is releasing a limited edition, seven-inch single paying tribute to the Boston Red Sox. The single features “The Sox Are Rockin'” and “Red Sox Nation.”

The opportunity to work with Cannon – whose hits include “Palisades Park,” “Way Down Yonder in New Orleans” and “Tallahassee Lassie” (which Los Straightjackets have frequently performed with Big Sandy) – even won over Los Straitjackets guitarist and Rensselaer native Eddie Angel.

“Being a lifelong Yankee fan, this was a little hard to swallow,” Angel said of recording the Red Sox anthems, “but being a huge Freddy Cannon fan trumped baseball rivalry. Freddy was a real blast to hang out with and record with.”