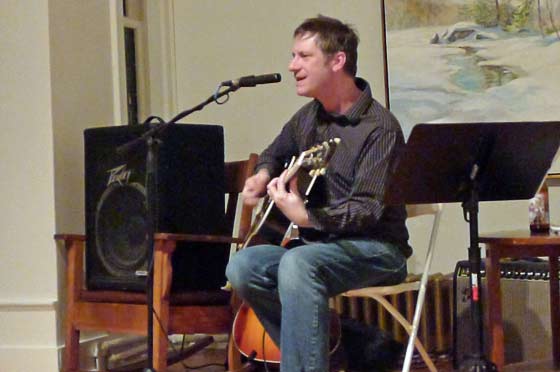 “Is there anything more boring than watching one man onstage?” asked Mike Gent before his recent solo show at Spring Street Gallery in Saratoga Springs. “I find watching people play solo to be incredibly boring, so I’m glad you came out,” he added a few minutes later. But Gent – who plays guitar in Saratoga-born rock and roll band the Figgs – kept the crowd in the small art gallery/music venue rapt as he played a mix of Figgs tunes, solo songs, newly written numbers and covers.

“(Romantic Needs Led to) False Alarms” and true-life story “Alice the Goon” were highlights from Gent’s last solo record, The Name of This Record Is Mike Gent. He got the crowd singing along to the “hey ho” chorus of Paul McCartney & the Wings’ British music hall homage, “Mrs. Vanderbilt.” And he debuted some well-received new songs, including a Hollywood Hills-inspired number written with fellow Capital Region-to-Boston expat John Powhida and a song based on newspaper accounts of a real-life cat hoarder that drew much laughter from the crowd.

The latter portion of the set skewed toward Figgs songs from the band’s most recent album, The Day Gravity Stopped (“No Time Is the Wrong Time to Groove,” “Jupiter Row”) and covers, including Neil Young’s exquisite After the Gold Rush ballad “Tell Me Why” and a trio of Kinks songs: “Where Have All the Good Times Gone,” “Too Much on My Mind” and the crowd-requested “Waterloo Sunset.”

Not long after Gent’s Spring Street Gallery appearance – part of a brief solo tour by the Saratoga Springs native last month – he opened for Graham Parker & the Rumour for several dates in April and then earlier this week debuted a brand-new Boston-based band called the Rapid Shave with producer/drummer Ducky Carlisle, Ted Collins and Marc Hickox.

NOTE: Figgs bassist Pete Donnelly, who has a new solo album of his own coming out soon and just guested with his old bandmates in NRBQ during an April 21 date in New Jersey, is scheduled to perform at Spring Street Gallery on Thursday, May 23 for a solo show, followed by a performance at Valentine’s Music Hall in Albany the night after. 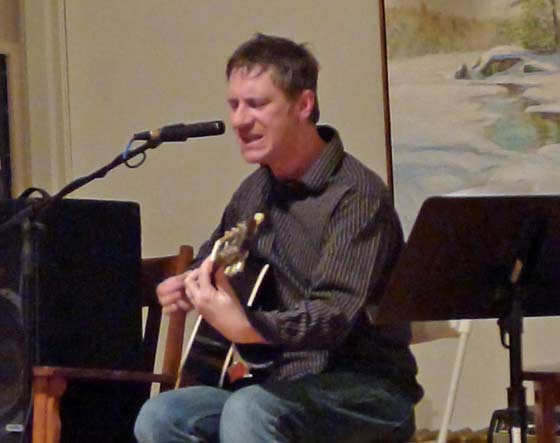