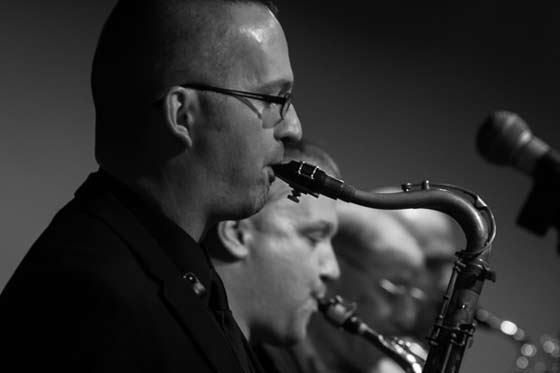 “It’s great to see a room packed for jazz in Schenectady,” tenorman Brian Patneaude told the folks at the Van Dyck’s full-to-bursting concert space. I have to agree, but I’d like to amend that statement: It was great to see a room packed for LOCAL jazz in Schenectady! After all, most of these guys do get around the area, and three-quarters of the All-Stars’ front line play this same space every month when Keith Pray’s Big Soul Ensemble does its first-Tuesday residency thing. I’m sure a lot of it had to do with the respective fan bases the players have generated over the years. The thing is, though, the fan base for one band member included everybody else on the bandstand.

That man would be Leo Russo, who’s been playing sax in Greater Nippertown longer than I’ve lived here, and I’m working on my third decade. Not only is Russo living proof of the deep roots jazz has in these parts, but he’s also gifted us with a sapling that’s growing into a mighty oak himself – multi-instrumentalist Lee Russo, who (like Patneaude and altoist Keith Pray, the fourth member of the All-Stars’ kickass front line) I would be happy to watch play the phone book. Lee played baritone sax as well as tenor on this evening, adding another axe to his already sizeable arsenal; I’m convinced he’s going to be our Joe Lovano, mastering a myriad number of reed instruments most people never heard of. I’d only seen the elder Russo play twice before: Once with a pickup band at an Albany Musicians Union JAM celebration, and once with pianist Yuko Kishimoto at Athens Cultural Center. To see him with this group was a once-in-a-lifetime thing, so I was on it like a duck on a June bug.

Patneaude took time out to laud “our hero, Leo Russo,” but that was after the septet had started the evening by slapping us around with a mammoth rendition of Cannonball Adderley’s “The Chant.” The front line’s harmony on the opening salvo was utterly mind-boggling, and it gave Pray the launch pad he needed to go right into orbit – which is what he did right out of the last hard chord. Every band member brought a tune to the table as this unit was shaped, and this tune was right in Pray’s muscular wheelhouse. He shared space with the rest of the front line, though, and every member gave the piece his own spin. Lee absolutely killed it on tenor after Pray stepped away, Patneaude brought it back to life so he could kill it again, and then Leo finished it off with a marvelously linear line that – while lacking the power of his partners’ efforts – made the tune shine with polish.

Although the elder Russo did blow up real good during the closing take on Hank Mobley’s “Old World, New Imports,” Leo has a ton of West Coast in him, something you can also hear in his son’s earliest recorded efforts. This gave the overall performance extra depth and allowed for the inclusion of super-cool stuff like Chet Baker’s “Carpsie’s Groove” and Stan Getz’s “The Dolphin.” The latter tune (which got a spectacularly bluesy work-up) was suggested by the younger Russo, who listened to it growing up; the former had the group breaking down to a quartet and giving Leo the total bossa spotlight, and he gave us all the romance we could eat while pianist Dave Payette, bassist Otto Gardner and drummer Jeff “Siege” Siegel provided sterling backup.

Payette contributed a gorgeous solo to “Dolphin” that was right on point with the material. The former Patneaude Quintet member is one of the most vibrant keyboardists this area’s ever seen, and while his solos on “Old World” and Michael Brecker’s “Midnight Voyage” may have seemed a tad asymmetrical, they were happy proof that Payette can still rule outside the box. Gardner is still this area’s Swiss Army Knife, with a tool (and a fat & fuzzy bass line) for every occasion, and he was on maximum attack for Lieber & Stoller’s “Bernie’s Tune” and Woody Herman’s “Four Brothers.” (The All-Stars were a little big band on that piece, knocking us flat to end the first set.) As for Siegel, this night was a pleasant reminder of the towering power and blinding creativity he can give us when he’s able to let his inner tiger out for a frolic. Siege’s arrangement of Kenny Dorham’s “La Mesha” was richer than the Koch brothers (and a LOT more satisfying), and his trade-offs with the front line throughout the evening showed there were seven lyricists on the stage.

For all the great moments these two sets gave us, the highlight of the evening had to be when the two Russos shared the stage for a lovely rendition of Jerome Kern’s “All the Things You Are.” Lee prefaced the piece by telling us of his earliest memories watching his father play shows on the Lake George paddle-wheeler Ticonderoga, adding “He’s still my favorite sax player in the world!” Two tenor saxes are not supposed to work together, but this was absolute magic, with Leo channeling Paul Desmond to a T and Lee showing the fruit does not fall far from the tree. When Leo squeezed his son’s shoulder at the end of the number, we all felt it.

Jazz Appreciation Month isn’t just about remembering the legends like Armstrong and Ellington, or celebrating the new leaders like Marsalis and Blanchard. It’s also about giving the love to the players in your own back yard, and acknowledging the people who helped make that local history. That happened on this night at the Van Dyck, and the thought of it all will keep me smiling for quite some time.

SECOND OPINIONS:
More of Albert Brooks’ photographs of the show at Albany Jazz