Bands Announced for SPAC Battle of the Bands! Let the Voting Begin… 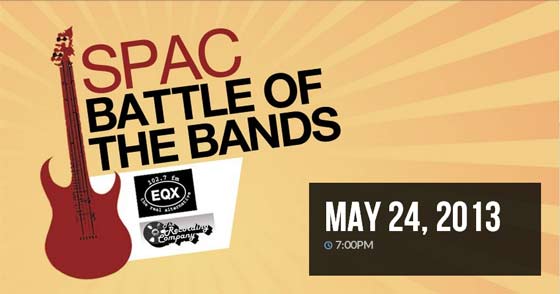 The entries are in for the fourth annual SPAC Battle of the Bands, and online voting has now begun.

38 bands have entered the competition this year, and they have each posted a music video for you to watch. Your vote will help decide one of the finalists. Voting is open now through 11:59pm on Wednesday (May 8), which means that you only have three days to vote.

GO HERE to cast your vote…

The top online vote-getter will perform in the finals of the SPAC Battle of the Bands at the Spa Little Theater in Saratoga Springs at 7pm on Friday, May 24, along with nine other finalists who will be chosen by the SPAC Selection Committee. The 10 finalists will each have 10 minutes to performance their original songs, and the grand prize winners will be announced at the end of the evening’s competition. Tickets are currently on sale priced at $20.

This year, two winners will be selected – one by popular vote of fans in attendance, and one by the panel of judges, which includes Richard Pawelczyk of NYC’s Webster Hall, Donna Eichmeyer of Live Nation, New York and yours truly, Greg Haymes of Nippertown.com.

Here is the list of the bands who have entered this year’s battle. So vote early, vote often and may the best bands move on to the final round of competition. And stay tuned to Nippertown – the 10 finalists will be announced on Friday (May 10):

Joan Rivers Live at the Colonial Theatre May 10 with Tom Judson, Brad Zimmerman