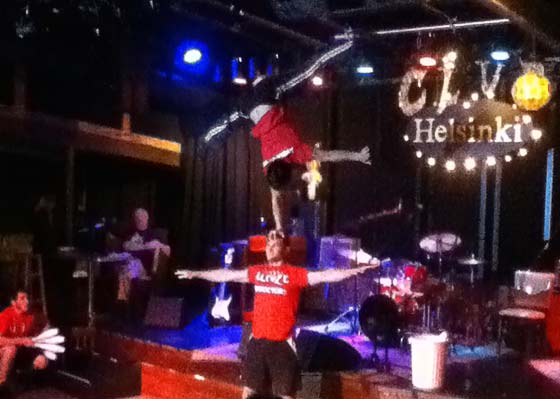 The weekly open mic night at Club Helsinki in Hudson is rapidly becoming a “happening.” Co-hosted by organist Cameron Melville (aka Bo Hammond) and multi-instrumentalist/performance artist Ryder Cooley, any given Tuesday night can be filled with surprises, with renowned artists such as Tommy Stinson and Meshell Ndegeocello showing up to work out new material, along with a host of talent from the Hudson Valley and beyond sharing their songs, poems, wit and wisdom. This past Tuesday was
no exception as the good folks of Proctors in Schenectady brought along members of Montreal’s Cirque Éloize to preview the upcoming August run of their show, “Cirkopolis.”

Stripped of the extravagant set designs, projections and costumes of their theatrical presentation, the troupe instead simply took to the floor of Club Helsinki and thrilled the large open mic crowd with high flying acrobatics, bowling-pin juggling (without hitting a single stage light) and feats of balance and strength. The action-packed floor exercise wrapped up with Proctors’ marketing director, Richard Lovrich – who presented a monologue earlier – getting in on the juggling act!

Cirque Éloize’s “Cirkopolis” will run from August 7-24 on the Mainstage at Proctors. The Club Helsinki Open Mic is every Tuesday evening, with sign-up at 7pm and the show at 8pm. 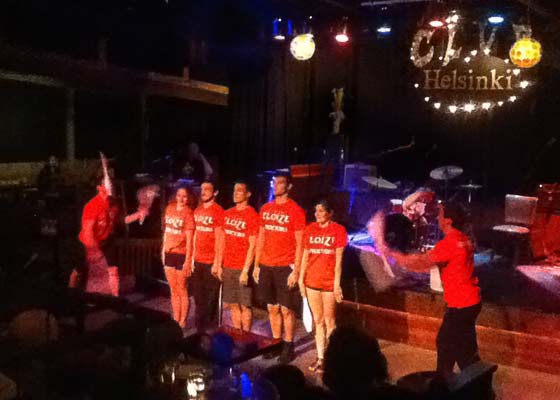