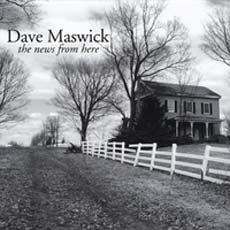 “You got to learn to shake the hand of time, ’cause time waits for no one, just leaves us all behind,” Dave Maswick sings on “Life Is What You Make It.” And while the recurring theme of The News From Here centers on love and loss in its many incarnations, it’s ultimately an uplifting, spiritually optimistic listening experience.

“Time changes everything, but time can’t change the truth, and only the broken-hearted know the truth about love,” he sings on “The truth About Love,” and Maswick has certainly put in his time on the Local 518 music scene, from his early-’80s tenure with Blotto (yes, he was Chevrolet Blotto) to his long-term, ongoing membership in north country stalwarts the Stony Creek Band.

As a songwriter, however, he’s penned batches of songs that haven’t fit neatly into the repertoire of those bands over the years, and so now he’s back with his brand new sophomore solo album The News From Here, the follow-up in 2005’s All the Lies of Spain.

The album is a real gem, showcasing Maswick’s diverse musical talents in a crisply produced 10-song package that opens up with the most radio-ready selection of the disc, “The Truth About Love.” The pure-pop nugget is one of four co-writes Steve Candlen, who also joins Maswick at the microphone.

There are plenty of other highlights – the Cajun-flavored, roadhouse rockabilly romp “21” (fueled by the interplay of Frank Orsini’s fiddle and Graham Tichy’s guitar); the slightly psychedelic Zen swirl of “Life Is What You Make It” (featuring Chuck D’Aloia’s spot-on guitar work and the nimble drum work of the Rodeo Barons’ Chris Carey); and “Lucy in 4,” a loping but insistent re-arrangement of the Beatles’ “Lucy in the Sky With Diamonds” (the album’s only non-original).

Conjuring up ’70s southern California country rock, guitarist Joel Brown steps in for an exquisite harmony-laden duet on “Places You Call Home” – which sounds like it could have been a lost track from CSN’s debut album or an out-take from the recent debut from London’s Treetop Flyers – spiked with the twang of Hank Soto’s guitar and Randy Rollman’s pedal steel guitar playing.

But Maswick’s real forte is the ballad form, and he intersperses several brilliant examples throughout the album. With the Celtic-tinged eulogy “The Last Man Standing” and the piano ballad “Second Chance,” he pares back the musical accompaniment to a bare minimum, allowing the songs to breathe and his soulful vocals to shine.

Dave Maswick joins Joel Brown for a dual-CD release party at the Parting Glass in Saratoga Springs at 3pm on Sunday (June 16). Brown celebrates the release of his new CD, “Places” (produced by Maswick), while Maswick launches his new solo disc “The News From Here.” They’ll be joined by a core band that includes Joel’s son Jason Brown on bass, as well as Steve Candlen, Don Young, Hank Soto and several additional special guests. Admission is FREE.