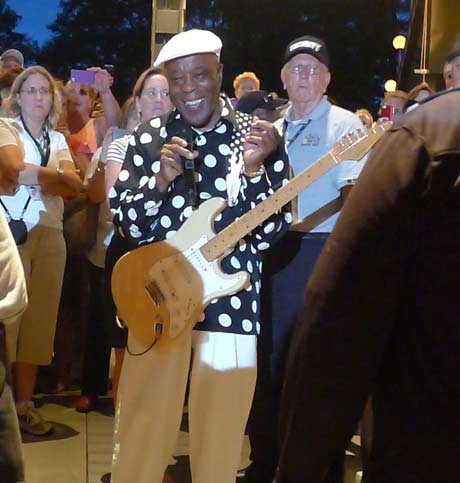 As the crowd in the amphitheater dwindled, the 36th annual Freihofer’s Saratoga Jazz Festival at the Saratoga Performing Arts Center wrapped up with a typically electrifying set by blues guitarslinger Buddy Guy. Sure, some folks had a long, Sunday night drive home to NJ or Philly or wherever ahead or them. Others probably just came to hear Tony Bennett, who delivered a short, but impressive set just prior to Guy. And I’m sure that some jazz snobs, simply turned up their noses, thinking, “Buddy Guy? That’s not jazz.”

And of course it wasn’t jazz. It was the blues, reeled off with grace, ease and consummate showmanship by one of the all-time greats.

Even at the age of 76, Guy has still got it. “I’m gonna play something so funky, you can smell it,” he declared, and working the crowd with the finesse of an expert entertainer, the polka-dot clad Guy and his band fired up such signature tunes as “Damn Right, I’ve Got the Blues” and “Five Long Years,” as well as tributes to his mentors – Junior Wells, John Lee Hooker, Muddy Waters and Albert King.

And then he took his stroll. I’ve seen Guy in concert at least a dozen times, and I’ve yet to see him play a concert stage-bound. So when he headed off around back of the drummer, I knew exactly what to expect. However, when he emerged through a side door and sauntered through the crowd while dishing out his delicious licks, the rest of the crowd went bonkers. He smiled, strolled, tossed off a few firey licks and waded still deeper into the heart of the cheering crowd. The security guards that tried to “protect” him from his admirers did not look happy.

Meanwhile onstage, the band just kept vamping through that old 12-bar blues. After all, Guy does this every night.

Once he finally made his way back onto the stage, Guy introduced his special guest guitarist, Quinn Sullivan from nearby New Bedford, Mass. He’s 14 years old – that’s right, 14 – but he played like a seasoned master. With Sullivan on board, the two guitar heroes tore through a few vintage nuggets from Cream and Jimi Hendrix, in addition to John Hiatt’s “Feels Like Rain” and Guy’s own equality anthem “Skin Deep,” with producer Tom Hambridge joining in on backing vocals.

The set ran long, but nobody in the audience was complaining. And Guy obviously wanted to play even longer because, well, damn right, he’s got the blues…

SECOND OPINIONS
James Lamparetta’s review at The Saratogian
Excerpt from David Singer’s review at The Daily Gazette: “Quite a leap from Bennett to Guy, but easier than one would think (probably harder to go from Guy to Bennett). A mere 76, Guy came out roaring on the guitar for a few rounds, then shouting, ‘I got the blues,’ then whispering the line a few times. ‘I’m going to play something so funky you can smell it,’ he told us starting a slow blues tune. The crowd thinned from Bennett’s show, but the remainder kept the energy high and Guy stayed on fire through the show.” 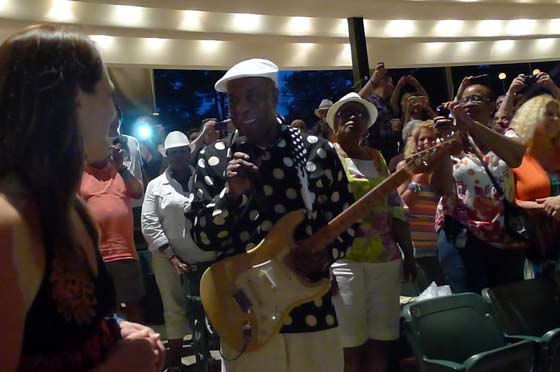