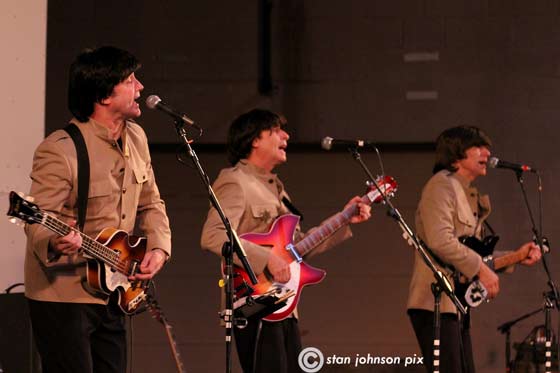 The advance advertising and the sign out in front of Tawasentha Park on the road into the Guilderland Performing Arts Center promised the Beatles tribute duo, Imagining Lennon and McCartney. But the stage set-up displayed three microphones and a whole lot of vintage Beatle gear. (Fab gear, sorry.)

Having seen more Beatles tributes than I care to remember, I was particularly intrigued to check out the merchandise table which offered t-shirts and CDs by Rick Bedrosian of Hair of the Dog, who I had seen a few weeks ago.

The duo concept had been expanded into Hey Jude…The Tribute, a full band, with Tom Raider as John, Brad Jarvis as Paul, Rick Bedrosian as George and Brad’s son Taylor Jarvis as Billy Preston (a young, blonde Billy,) who was filling in for keyboardist Rich Coogan, who, along with Don Ackerman as Ringo, were absent this evening.

But the drummer-less version was more than adequate, highlighting the vocal and instrumental recreations and allowing the constant singing of audience members to fill in the sound.

The quartet performed two sets, with costumes first from the early Beatles period and then from the mid-sixties, Shea-stadium-era tour. The music in the first set covered tunes from the albums Please Please Me through A Hard Day’s Night, while the second set covered Help through Rubber Soul.

Best of all, they were faithful to the recorded songs, playing on instruments that were the same as the orginals used, and the stage banter was mostly funny and reflective of what I’ve heard on many live recordings of the Beatles.

The band finished with a bold, semi-acoustic move – “You’ve Got To Hide Your Love Away” and “Yesterday,” which worked because of the audience singing along. The logical finish, “Hey Jude,” was the only song out of the chronological order that evening, but it was the perfect choice to finish the sing-a-long. The encore? “Twist and Shout,” with more audience participation. 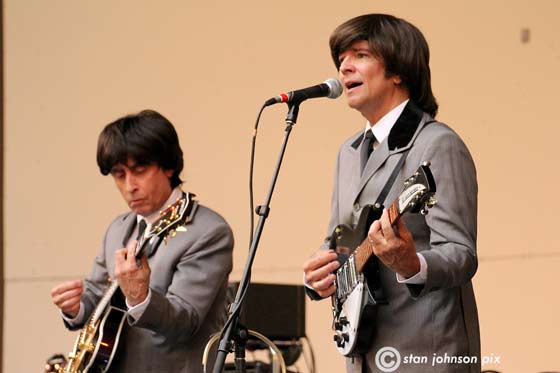