Review: “Painting His Wings” at the Berkshire Fringe – It Has Everything a Play Needs [Berkshire on Stage] 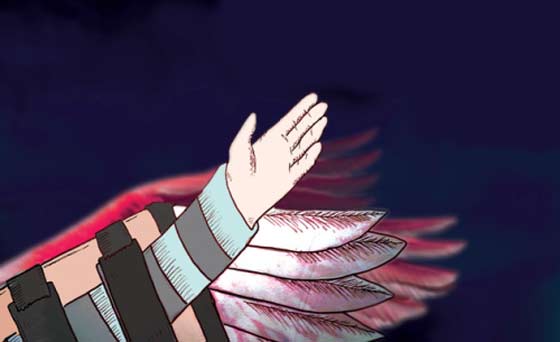 For the Berkshire Fringe, Painting His Wings borders on the traditional. It is very clearly a play with a script that tells a linear story. The four actors play the same characters throughout, and, although its billed as a “Partial Puppet Play” the puppets consist of six finger puppets and two pair of wings. I mention this because I know puppetry is a turn-off for some who do not consider it true “theatre.”

Why isn’t Abellona Whalen (Katie Lawson) talking? She talks to the audience, and to her older brother Christopher (Nathaniel Moore), but not to her parents Willa (Alison Scaramella) and Paul (Antonio David Lyons) until the very end, when the source of the family’s sorrow and the structure of the play is revealed.

Abellona’s age is never specified, but she can read and she goes to school and yet still believes in what child psychologists call “magical thinking,” so she is somewhere between the ages of seven and ten. Christopher is probably in the fragile years of early adolescence, between 11-14. Both are creative children – the product of a loving marriage and a happy home. Christopher is fascinated by flight. He makes and paints little airplanes, which he adds one by one to a mobile that hangs over his bed. He is also painting a pair of cardboard wings to blend in to the night sky. Abellona, who lugs around a copy of H. A. Rey’s “The Stars,” is enamored of the night sky and is teaching herself to identify individual stars and the constellations. He lets her help paint stars on to his wings, and she insists that her favorite star, Antarus, be represented.