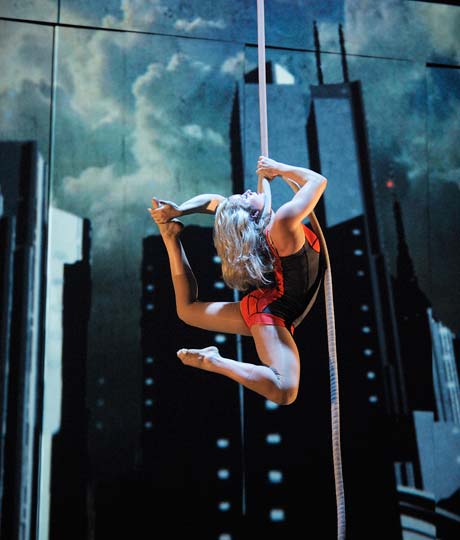 Cirque Eloize’s “Cirkopolis” is more of a themed dance performance that incorporates a variety of traditional circus skills – feats of strength and balance, juggling, acrobatics, aerial work and a bit of clowning.

The 12-member troupe from Montreal launched its inaugural summer residency at Proctors in Schenectady on Wednesday (August 7) with the North American premiere of “Cirkopolis,” co-directed by Jeannot Painchaud and choreographer Dave St-Pierre.

There’s not much of an actual narrative woven into the 85-minute show, which concerns the desire to break away from the soul-crushing drudgery of menial, mundane office work. To assert yourself as an individual. To set your soul free. Or as David Crosby once put it so succinctly, “Let your freak-flag fly.” In fact, the entire “plot” can be summed up in about a minute (as Apple did with their iconic Super Bowl commercial).

The stage set design of video projections by Robert Massicotte and Alexis Laurence very nicely enhances and emphasizes the oppressive atmosphere, drawing on the visual imagery of Fritz Lang’s “Metropolis” (of course) and Terry Gilliam’s “Brazil,” as well as the crap-game-in-the-sewer scene from “Guys and Dolls,” but primarily from Charlie Chaplin’s classic assembly-line scene from “Modern Times,” filled with ominous, foreboding machinery and giant gears constantly in motion, grinding away. 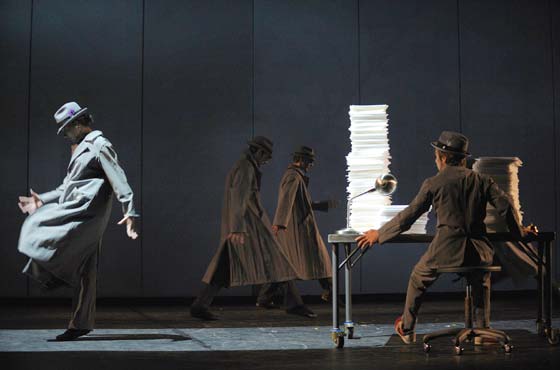 The music also shifts gears with each act – from techno-jazz to progressive rock to French cafe ballad.

And the costume designs by Liz Vandal underscore the video projections and the theme of oppression – all gray overcoats, business suits and fedoras with just a hint of color peeking through the dull sameness. That is, until it’s time for each of the performers to break away from the pack, shed their drab clothing and emerge in brightly colored circus outfits to shine in the spotlight with their particular athletic skill.

But, of course, the heart of the show is the circus skills, and the performances are indeed impressive – most notably Angelica Bongiovonni whose poetic solo turn on the Cyr Wheel is all sublime grace made to look effortless (see photo at bottom), and Lauren Herley, whose masterful solo on the Spanish web is simply fearless (top photo).

The shirtless, Wolverine-like Ugo Laffolay earns his fair share of ahhs from the crowd, too, for his gymnastic balancing routines, as well as his physique. And Ashley Carr brings moments of comic relief to the show, both interacting with Laffolay and on his own.

Yes, there were a few missteps along the way on opening night. A few juggling pins were dropped, and Dominque Bouchard never did get the grand finale of his Diabolo routine right (although several of his other moves were quite jaw-dropping). Minor quibbles, really…

Overall, “Cirkopolis” may be too dark for some young children, but as an adult entertainment, it’s a delight, whether you marvel at the athletic prowess of the performers or simply surrender to the abstract movement of it all.

Cirque Eloize’s production of “Cirkopolis” continues its run at Proctors in Schenectady through Saturday, August 24. Ticket prices are $20, $30, $40, $50 & $65. While in residence, Cirque Eloize is also offering circus skill classes for both youngsters and adults.

SECOND OPINIONS
Steve Barnes’ review at The Times Union
Review at Did You Weekend?
Mamatoga Jenny’s review at Mamatoga
Schuyler’s review at Discover Albany
Excerpt from Wendy Liberatore’s review at The Daily Gazette: “The show was not much different from other circus spectacles — there were the acrobatic feats, juggling, contortions, aerial dancing on poles and trapezes and the swirl of the cyr wheels. What was unique was Painchaud and St. Pierre’s ability to tie these acts into a cohesive package, into a weird world where men flipped through the air and women rolled and dangled upside down from ropes. Moreover, it was all bound by a video panorama of wheels and gears that continually churned in the background. Designed by Robert Massicotte, this virtual backdrop kept the dim, dank city, and the show’s energy, in a constant boil.” 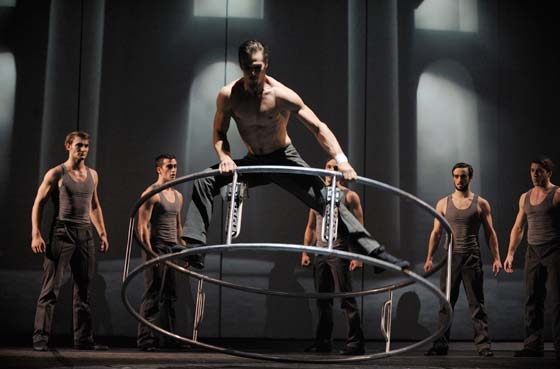 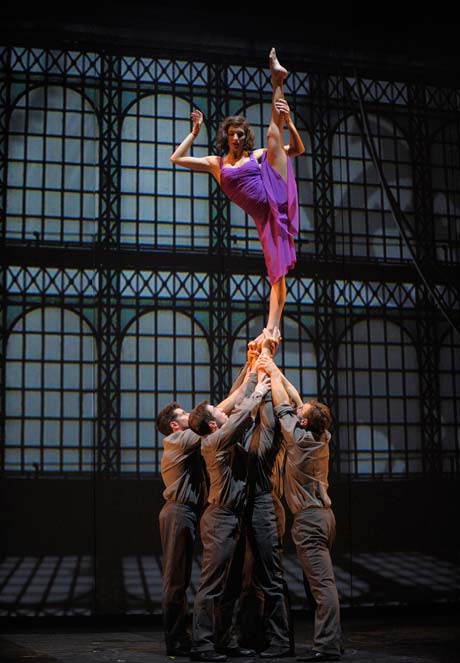 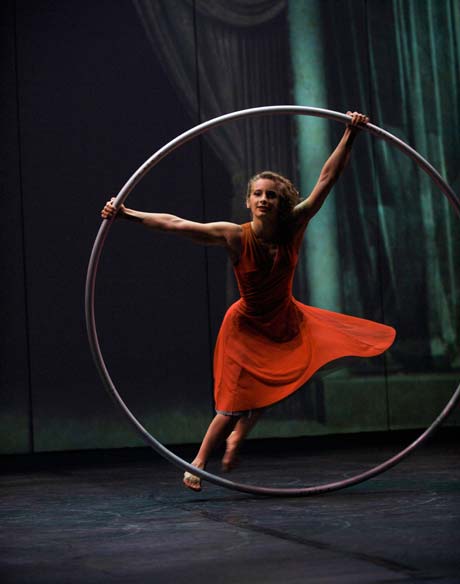 “Deathtrap” Gets All the Laughs and a Fright or Two