From the Stage to the Page: A New Book About Caffe Lena 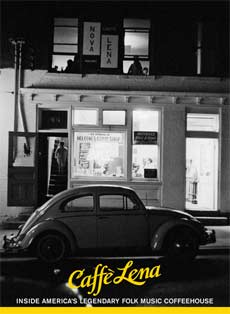 We are patiently waiting for next month’s release of the 3-CD box set, Live at Caffè Lena: Music From America’s Legendary Coffeehouse, 1967–2013, which we recently wrote about.

But that’s not all of the national attention that Saratoga Springs’ venerable caffe will be getting this fall.

Slated for publication in October from powerHouse Books is “Caffè Lena: Inside America’s Legendary Folk Music Coffeehouse.” The 288-page hardcover book brings more than 200 never-before-seen, evocative images and stories to the public. Early 1960s photographs of Bob Dylan and Pete Seeger as well as modern-day images of Rufus Wainwright and Patty Larkin blend with rare memorabilia and an oral history derived from more than 100 original interviews with the artists who have graced Caffè Lena’s hallowed stage over the decades, including Ani DiFranco, Utah Phillips, Dave Van Ronk, Spalding Gray and other luminaries of the folk, blues, jazz and theater worlds.

Edited by Jocelyn Arem, director of the Caffè Lena History Project, the book also features a foreward by actor-singer-songwriter Tim Robbins. Many of the photographs included in the book were taken by the late Joe Alper and Joseph Deuel (a regular Nippertown contributor, who can usually be found behind the soundboard at Caffe Lena).