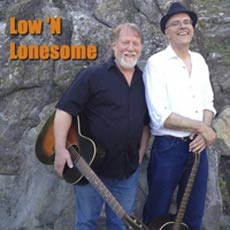 Two guys and their guitars. No extraneous instrumentation. No special guests. No fancy production tricks.

What you hear on their debut disc is pretty much exactly what you get when you catch Low ‘N Lonesome doin’ their thing live.

Singer-guitarists Phil Drum and Rob Adkins – who make up the Saratoga Springs-based duo – are also co-founders of the Saratoga Acoustic Blues Society, which should tell you pretty much what this debut album is all about – keeping alive the old blues traditions and nudging ’em forward here and there ever so slightly. And they do a fine job…

Produced by Sonny Speed – who also plays with Drum in their electric blues band the Resonators – at Saratoga’s Son Spot Studios, the recording is crisp and clean, capturing the sparkling guitar picking the twosome dishes out throughout the 10-song, 40-minute album. Only three of the tunes are originals, but Adkins’ “Glitz & Glamor” is a stand-out, neatly leading into Drum’s lone songwriting credit, “Hollywood Sun,” which conjures up the age-old ingenue’s dream of making it big on California movie-making scene. And while musically speaking, “Hollywood Sun” veers furthest away from the trad end of the blues spectrum, it maintains a distinctly vintage approach lyrically, name-checking not Angelina Jolie or Sandra Bullock, but rather Claudette Colbert.

They slip in a bit of slide guitar on the medley of blues staples “Key to the Highway/Trouble in Mind,” but for the most part, they avoid the over-worked classics and dig up lesser known nuggets, showcasing their good taste, as well as their fine finger-picking (especially on the hot-wired Lonnie Johnson/Eddie Lang instrumental “Hot Fingers”).

The best of the bunch might be their rumbling boogie woogie of “When the Levee Breaks” – which naturally adheres to the original Kansas Joe McCoy/Memphis Minnie version, rather than Led Zep’s – and their jaunty ragtime jazz medley of Kid Ory’s “Muskrat Ramble” – baby-boomer-era folk fans will recognize it as the basis for Country Joe & the Fish’s signature anti-war anthem “I-Feel-Like-I’m-Fixin’-to-Die Rag” – and “Heebie Jeebies.”

Album Review: Holding Onto Something Good by Sabrina…