CD: Jim Gaudet & the Railroad Boys’ “Reasons That I Run” 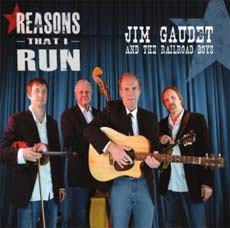 Jim Gaudet & the Railroad Boys are back with their third album, and no question about it, it’s the band’s best outing to date. The 13-song disc features a blend of bluegrass, Cajun, blues, story songs, an instrumental, a murder ballad and a goodbye waltz, as well as a pair of unexpected covers.

With his wry wit and masterfully understated vocals, Jim Gaudet was one of Nippertown’s finest singer-songwriters back in his solo days, but shortly after the release of his brilliant solo album Give Up the Ghost, he did just that, dropping out of the spotlight and disappearing from the Capital Region music scene for an eight-year hiatus. With his aptly titled 2007 comeback album ReCalling It Quits, he proved that he not only hadn’t lost his touch, but he also bolstered his music to the next level with a band of musicians – including bassist Bob Ristau and mandolinist Sten Isachen – who wrapped their skills around his tunes like a comfortable old cardigan.

They became the core of the Railroad Boys, and with subsequent albums (2009’s So Far So Good and 2011’s No Questions Asked), JG&RRB have edged away from the folk realm, delving further and further toward bluegrass, and this album continues that journey. Ristau anchors the tunes with his warm dog-house bass, while Isachsen’s mandolin provides perfectly tasty trills and filagrees, as well as percussive rhythm chucks. Upping the ante this time around is the addition of fiddler Mat Kane, who utilizes the Louisiana bayou chops that he honed during his tenure with the Doc Marshalls to nudge the Boys into swamp-soaked Cajun territory with the rousing “I Ain’t Gettin’ Up.”

Isachen lands his first songwriting credit with “Hartford Street,” the album’s lone instrumental and a fitting tribute to the late great John Hartford. Adding extra drive to the zippy tune is guest banjo man Scott Hopkins (the Wheelbarrow Boys, Fairview Avenue), who also lends his considerable five-string skills to the cheatin’ song, “In Some Other’s Arms.”

As a songwriter, Gaudet has always been attracted to the narratives of those living on the wrong side of the law, and he continues his lyrical focus on criminal activity with such stellar songs as “Johnny Was an Outlaw,” “Justify My Soul,” “Railroad Boys” and, of course, the album’s title track.

But the songs aren’t all about murder, bank robbery and love gone wrong. He shines some light down on the blusey desperation of “Darkside of Lonesome,” and the stone-cold country kiss-off waltz “Raylene,” is hilarious, opening with the lyric, “She scribbled for fifteen pages, but ‘goodbye’ was all she wrote…”

Rounding out the bakers’ dozen of tunes, Gaudet includes a pair of well-chosen covers. Dire Straits’ “Walk of Life” is a perfect fit for the Boys, closing out the album on a high note, all hoedown fiddle and chiming mandolin. But the real wild card here is “Peanut Butter,” and major kudos go out to whoever dug up the Marathons’ old 1961 frat-rockin’ R&B nugget and transformed it into a funky Railroad Boys sing-along.

Jim Gaudet & the Railroad Boys are headed into the Steamer No. 10 Theatre in Albany at 8pm on Saturday (September 14) in support of their third album “Reasons That I Run.” Tickets are $13 in advance; $15 at the door.