CD: The Last Conspirators’ “A Celebration of Fury” 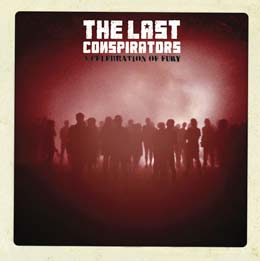 THE LAST CONSPIRATORS
A Celebration of Fury
(Driving Rain Music)

The Last Conspirators are about to unleash their third album, A Celebration of Fury, and they’re doing it in a big way with a CD release party performance at LarkFest in Albany on Saturday (September 21). Labeled by many as a punk band, these four musicians display their musical diversity with surf-inspired guitar in “Last Ones Standing,” ’60s jangling distorted guitar in “Radio Warfare,” the country/rock sound of “Somewhere Tonight in America” and ’60s psychedelic rock sprinkled in perfect proportions in “Desperate Skies.” After listening to the album, it’s apparent these guys are seasoned veterans at what they do.

The production of the album by the band’s guitarist Terry Plunkett is spectacular. All of the tracks are balanced. Throughout the album, there is not one song that has too much bass or an overpowering guitar part. The vocals are clear. It’s apparent that both the producer and Albany Audio’s John Chiara (who recorded and mixed the album) have keen ears and know how to make an album sound fantastic.

“Radio Warfare,” the second song on A Celebration of Fury, will stand the test of time. Twenty years from now, people will still be listening to it. The lyrics do not have an expiration date. It’s a radio-worthy song and an anthem for the ages. Its hard-edged, haunting vocals by Tim Livingston and jangling distorted guitars by both Terry and bassist Nick Bisanz are not only catchy, but chill-inducing.

Many of the songs either address politics or snub the powers that be, including “Powerful Friends,” “Somewhere Tonight in America,” “No Time for Egos” and the title track. With the song “Powerful Friends,” the media and people in the government are being mocked. This song also includes one of the most entertaining guitar solos I’ve ever heard besides Clapton. Just be careful you don’t think the beginning is the end, since it teases you with a wrapping-up sound. “No Time for Egos” also features spectacular drumming by Al Kash, enhancing and driving the song.

All in all, the Last Conspirators’ A Celebration of Fury must be considered one of the best local discs of the year. The album was expertly written and produced. And since the songs are so diverse, any person can find at least one or two songs they like. Play it again and again.

The Last Conspirators celebrate the release of “A Celebration of Fury” with their performance at LarkFest on Lark Street in Albany on Saturday (September 21). They’re scheduled to hit the Madison Avenue Stage at 12:30pm. Admission is, of course, free. GO HERE for the complete LarkFest schedule…