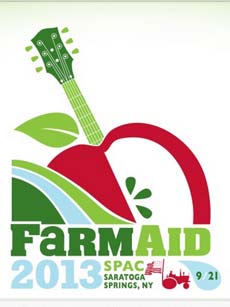 Since 1985, musicians, farmers and concerned citizens have gathered for an annual celebration to help raise awareness and garner funding for family farmers all across America. And on Saturday (September 21) Farm Aid is taking over the Saratoga Performing Arts Center in Saratoga Springs.

Farm Aid board members are scheduled to perform – but of course the Farm Aid honchos are no ordinary board of directors. They’re headliners Willie Nelson, Neil Young, John Mellencamp and Dave Matthews…

Ticket prices for Saturday’s celebration range from $40 to $150, but if you haven’t already got yours, it looks like you’re out of luck. Not surprisingly, the fest sold out quickly, shortly after tickets went on sale back in June. But that doesn’t mean that you’ll be completely shut out of the festivities. You can listening live on Willie Nelson’s SiriusXM channel, Willie’s Roadhouse (56), beginning at 2pm. Farm Aid 2013 will also be webcast at farmaid.org beginning at 5pm, and the webcast will shown on the big screen at Putnam Den in Saratoga Springs. Admission is free; donations to Farm Aid will be accepted.

And a batch of new bands have recently been added to Saturday’s festival line-up, too, including Jamey Johnson, Sasha Dobson, Insects vs. Robots, the Blackwood Quartet, Jesse Lenat, Will Dailey and Nippertown’s own the Parlor.

Here’s the complete schedule of when the bands will be performing at Saturday’s Farm Aid extravaganza:

Also on the Homegrown Stage, there will be performances by Will Dailey and The Parlor beginning at 12noon.

NOTE: Although originally announced as performers back in June, JD & the Straight Shot are no longer scheduled to play at Farm Aid.