The whole of the moon wasn’t hanging in the Nippertown sky last Thursday night, but it was shining in Mike Scott’s eyes. And there was fire in there, too. Leading the Waterboys into The Egg, Scott was a poet of uncommon passion, armed with a guitar set on “stun” – an unabashedly romantic Celtic soul man, a rock ‘n’ roll mystic, a true believer.

Back in March, Scott brought a pared-down, sit-down acoustic trio of the Waterboys for a sold-out, standing-room-only performance at WAMC-FM’s The Linda that was quite simply transcendent. Hands down, the best concert I’ve seen all year.

So expectations were high for the Waterboys’ full-band, six-piece return at The Egg. Maybe a bit too high. The seats in The Egg’s Hart Theatre weren’t even half full, not that it seemed to matter one wit to Scott and his band. They came rolling out with “Strange Boat,” and then romped through their best-known song “Fisherman’s Blues” in the second slot. Clearly they weren’t playing to expectations. And they didn’t need to…

The band – referred to “the American Waterboys” by Scott – featured fab Dublin fiddler Steve Wickham and keyboardist Daniel Mintseris (both of whom were with him at The Linda), as well as guitarist Jay Barclay, bassist Malcolm Gold and drummer Chris Benelli, all of whom proved quite adept at riding the waves of dynamics that help make Scott’s “big music” sound so natural, so organic. Barclay was often lost in the sound mix or altogether inaudible, but it was never a major factor, as it was Wickham who did almost all of the heavy lifting, musically speaking.

The band dipped all the way back to their debut album for “The Girl on the Swing” (with Scott on electric guitar) and the stomper “A Girl Called Johnny” (with Scott pounding the piano). And they flexed their muscles on a brand new blues-rocker, “Still a Freak,” described as “an autobiographical number” by Scott, who howled over Mintseris’ boogie woogie piano riffage, declaring “Things disappear, but I’m still here.”

The band romped and roared through “I Can See Elvis,” as Scott name-checked everyone from Louis Armstrong and Plato to Joan of Arc and William Blake. Scott and Wickham also took a dip into the traditional songbag with a spirited duo performance of “The Raggle Taggle Gypsy.”

Somewhat surprisingly, the band offered only three selections from the Waterboys’ ambitious new album, An Appointment With Mr. Yeats, in which Scott and the band take the poems of William Butler Yeats and set them to music that allows their multitude of facets to shine, whether it was the majestic “The Song of Wandering Aengus,” “White Birds” (described by Scott as “Yeats’ supreme love song”) or the sprawling, shimmering, epic “Mad as the Mist and Snow,” with Wickham and Barclay in masks, engaged in a dueling dance.

And, yes, Scott shifted over to piano to deliver once of my all-time favorite songs, “The Whole of the Moon,” and it was glorious. But I’ve got to admit that even that gem paled in comparison to the galvanizing, go-for-the-throat rendition of “We Will Not Be Lovers.”

We waited three decades for the Waterboys to make a tour stop in Nippertown, and then they showed up twice in the same year. Yes, it was worth the wait.

Afro-haired Edinburgh singer-songwriter Freddie Stevenson – who co-authored a couple of tunes on the Waterboys’ current album – opened the evening with a solid 40-minute set, accompanied by the excellent six-string banjo man Teddy Kumpel. His set ranged from the gently rolling “I Am the Ocean” to the Chuck Berry-like chug of “Sweet Revenge” to the noir-ish urban tale, “The City Is King.” And his Dylanesque “Lost” kicked off with the best opening line that I’ve heard in a long time, “Ambulances rush to foregone conclusions…” 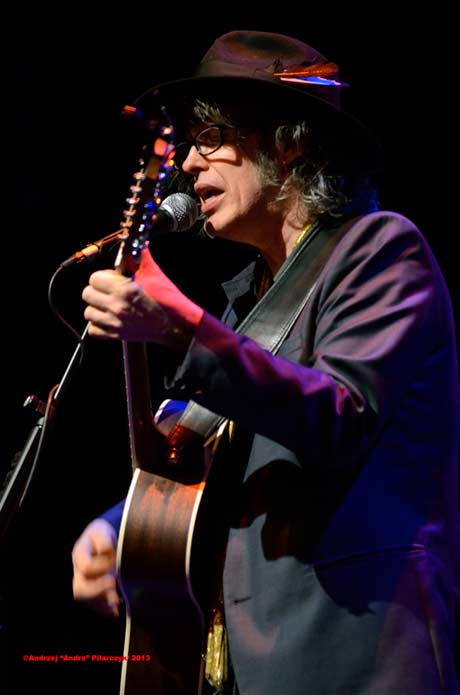