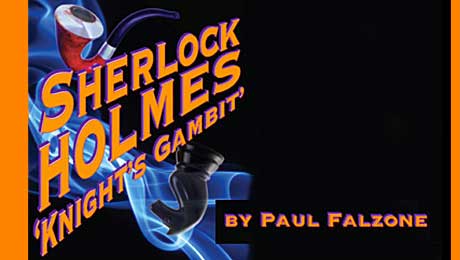 Larry Murray: Early in the development of Paul Falzone’s Sherlock Holmes – Knight’s Gambit we heard that Nigel Gore was going to play Holmes, and we were both pretty excited in seeing this brilliant actor – often Tina Packer’s onstage partner at Shakespeare & Company in Lenox – in a very different role. But as Oldcastle’s director Eric Peterson explained before the performance began, Gore had to bow out and open auditions were held for his part in New York City on Friday, September 13, a mere two weeks before the original opening night. Rehearsals were delayed, and the opening was pushed up a week as Nick Plakias took the title role at the last minute.

Gail M. Burns: I understand that Gore’s mother fell ill, requiring him to head home to Great Britain. Of course, we wish her a speedy recovery and look forward to welcoming him back to New England soon, but a real-life crisis like that creates problems of a very different nature for a theatre company. Significant income from fall productions come from school groups, and postponing or canceling those bookings can be devastating for finances and community relations.

Larry: Plakias and the cast, which included Richard Howe, Scott McGowan and Bill Tatum, first appeared on stage as if nothing untoward had happened, but it wasn’t too deep into the first act when Plakias liberated his script from under the chessboard and began to refer to it in quick glances, as if to be sure of his next cue. It was clear he knew the script – or at least 95% of it – but was not yet on solid ground.

That got me thinking about how amazing actors and theatre companies are when faced with the adversities of life. We don’t think of actors as people who get indigestion or the blues, have family members who get sick, or worse, and while there are understudies for major shows on Broadway they are not at all common in regional or community theatres.

Dynamite Double-Header at Valentine’s on Saturday