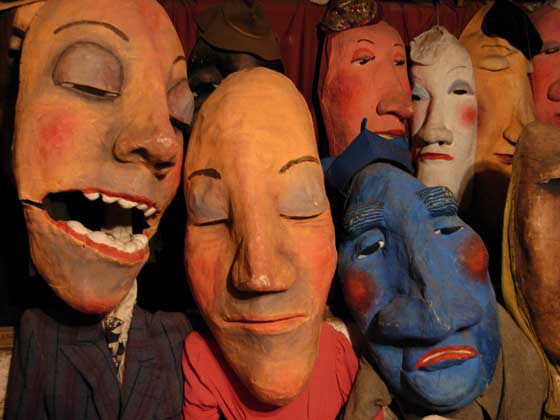 “We believe in puppet theater as a wholesome and powerful language that can touch men and women and children alike, and we hope that our plays are true and are saying what has to be said, and that they add to your enjoyment and enlightenment.”
– Peter Schumann

Celebrate the 50th anniversary of the magnificent Bread & Puppet Theater with a special performance at the Sanctuary for Independent Media in Troy at 7pm on Thursday (October 17).

Equal parts poetic and political, Bread & Puppet Theater will be performing several short theater pieces spanning their half century, including “King Story” (an early anti-war piece which was originally performed in 1967), “President and Chair,” (a 1992 work that pokes fun at presidents, election campaigns and puppet shows), “The Foot” (originally performed in NYC at an anti-nuke rally in 1982) and “A Man Says Goodbye To His Mother” (created during the Vietnam War era).

Founded in 1963 by Peter Schumann, Bread & Puppet Theater originally tackled concerns of rent, rats and living conditions of the neighborhoods of the Lower East Side of Manhattan in New York City. Today, productions have developed into more complex theater pieces, integrating music, dance and more.

Admission for Thursday’s show at the Sanctuary for Independent Media is pay-what-you-wish ($10 suggested, $5 student/low income). Tickets are available for advance purchase or at the door.

This giveaway has ended.