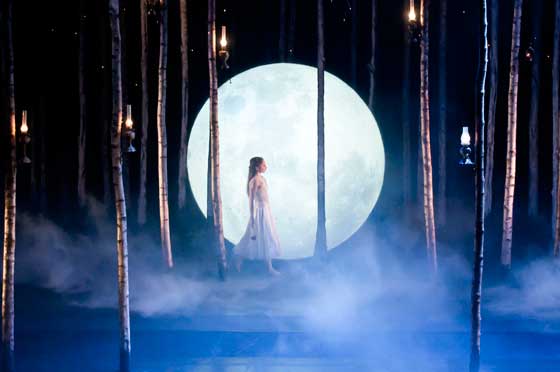 Like all good fairy tales, “Matthew Bourne’s Sleeping Beauty” begins with “Once upon a time,” and it ends with “They all lived happily ever after.”

In between, plenty happens that the Brothers Grimm, Tchaikovsky and even Walt Disney never saw coming.

Now, I don’t know bupkis about dance, and I’m certainly not about to pretend that I do, so if you’re looking for a more dance-centric evaluation of the production that runs through Sunday at Proctors in Schenectady, I suggest that you look elsewhere. (Scroll to the bottom of this review for second opinions.)

As an evening of theater, however, “Sleeping Beauty” will definitely not put you to sleep. British director-choreographer-writer Matthew Bourne had a bold, brash vision for this fairy tale, and his 24-member New Adventures dance company breathe eye-popping life into it onstage. This is a ballet for people who think that they don’t like ballet. It’s a stunning visual feast – especially the sumptuous sets and costume designs of Lez Brotherston. Just sit back, and let it all wash over you.

Of course, “Sleeping Beauty” is at heart a love story that spans a little more than a century, and Bourne utilizes the broad time frame to showcase a wide variety of evolving dance forms from ballet to the waltz to contemporary modern dance.

But the story also concerns that classic tug o’ war between good and evil. And despite the thoroughly convincing, unbridled passion that Hannah Vassallo exhibits as Princess Aurora (the title character), it’s Tom Jackson Greaves’ performance in the dual role of the dark fairy Carabosse and her son Caradoc that will likely remain burned into your retina long after the final curtain rings down.

While Greaves owns the night, baby Aurora – a puppet expertly operated by black-clad, nearly invisible handlers – nearly steals the show with her Act I performance.

It’s not always clear who’s who, as the dancers take on multiple roles, but it doesn’t really matter if you can’t discern Autumnus (the Fairy of Plenty) from Hibernia (the Fairy of Rebirth) or Feral (the Fairy of Spirit). Like the Capulets and Montagues or the Jets and the Sharks, it’s all color-coded for you (the good fairies have white wings; the evil fairies have black wings), and the basic gist of the plot-line is easily understood.

However, once the action moves from the gilded palatial bedroom of baby Aurora (Act I) and the sunny Edwardian lawn (Act II), the contemporary post-intermission half of the performance is a bit of a let-down, although Brotherston’s enchanted forest of sleepwalkers (Act III) continues to command your attention.

If the purists aren’t already scared off, here’s another warning – there’s no orchestra. Tchaikovsky’s time-honored accompanying music is recorded.

And, yes, there are tennis players. And conveyor belts. And vampires. And a sleek, minimalist, neon-lit nightclub where Miley Cyrus or Lindsay Lohan might feel right at home. Not exactly the traditional Mother Goose/Grimm Brothers fairy tale elements. But if you go to a Bourne production looking for the traditional or the conventional, well, you’ve walked through the wrong door.

NOTE: The dancers rotate nightly in the roles that they perform. This review refers to the cast that performed in the opening night at Proctors on Tuesday (October 15).

SECOND OPINIONS:
Tresca Weinstein’s review at The Times Union
Will Gallagher’s review at Discover Albany
Kara Panetta’s review at Did You Weekend?
Excerpt from Wendy Libertore’s review at The Daily Gazette: “As seen at Proctors on Tuesday night, Bourne’s ‘The Sleeping Beauty: A Gothic Romance’ is nothing balletomanes could scoff at nor decry as foul as Bourne is superbly respectful of Tchaikovsky’s favorite score. Sure there are vampires and attempts at a human sacrifice, but this imaginative rendering is so stunning and creative that many moments are musical revelations — from the fairy variations to the final wedding scene. Bourne actually enhances the fable with high drama and sweet romance while preserving its magic, but none of its innocence. He also updates it, placing it first in the Victorian era and then, when the princess awakes, in modern times. Better still, his creative partner, Lez Brotherston, produces sets and costumes that are dazzlers. Rich in detail, every scene is framed in opulence.” 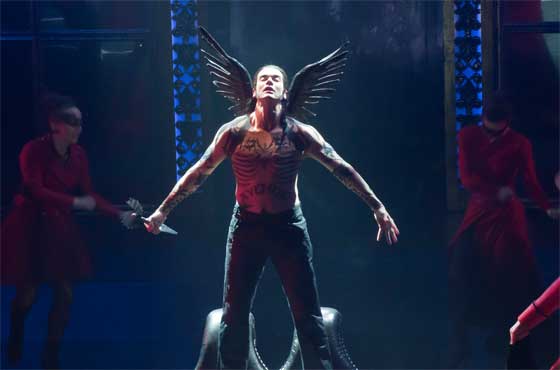 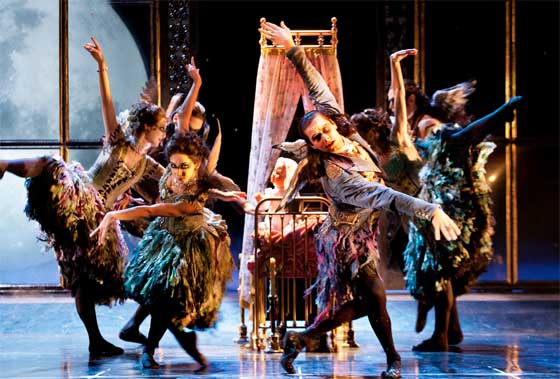