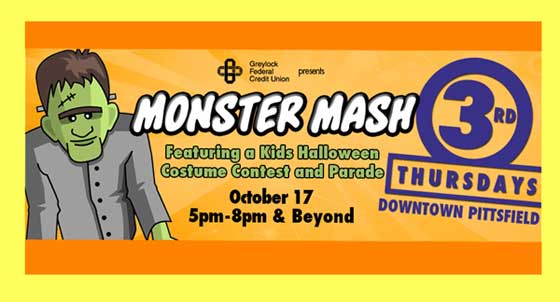 The autumnal spirit of Halloween fun will be everywhere at today’s (October 17) 3rd Thursday, Pittsfield’s award-winning free street festival held from 5-8pm in downtown’s Upstreet Cultural District. This month’s Halloween theme is Monster Mash, and is sponsored by Greylock Federal Credit Union, including the annual Kids Costume Contest and Parade.

“The seventh year of 3rd Thursdays has been amazing thanks to our terrific partners and sponsors,” noted Pittsfield’s Cultural Development Director Megan Whilden, whose office oversees the free street festival series. “We were thrilled with this year’s turnout, which we estimate as over 40,000 in the first five months, and with the creativity of our partners. From Pittsfield Public Schools’ flash mob dance performance involving hundreds of students in May, to the two dozen exciting science, tech, math and engineering experiments led by Sabic’s terrific team in August, we have together engaged our community in creative ways each month.”

This year’s costume contest and parade will be centered at the intersection of Columbus Avenue and North Street, where the City Stage will be as well. Greylock Federal Credit Union will be giving out goodie bags to all kids dressed in costume, and The Berkshire Eagle will have a free photo booth set up to take photos of costumed kids, which will be uploaded to their website. The Greylock Children’s Costume Parade will kick off at 6pm, and everyone is invited to take part.