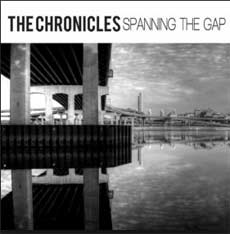 The Chronicles weren’t about to fall victim to the infamous sophomore slump. Even though they released their self-titled debut album less than a year ago, they leapt right back into the recording studio, upping their game considerably with the addition of producer Alan Evans, drummer for the soul-jazz groovemeisters Soulive.

And when they emerged from White Lake Music in Albany, they had Spanning the Gap in hand. The Chronicles will be celebrating the release of their new album on Friday night (October 25) at Red Square in Albany. The album – featuring nine new original songs – is the next step in the band’s ever-funky hybridization of hip-hop, jazz and R&B. A digital download of the album is included with each paid admission at the release party. The album will also be available for purchase on vinyl.

Built atop a rock-solid rhythmic foundation, the heavyweight horns fuel the album from the opening funk-bomb strut of “Village Livin” to the short but sweet finale, “Reprise.” While the album is largely instrumental, a few vocal selections – including Tara Merritt’s slinky “Way Back Home” and Jeff Nania’s jazz of jazz rap on the title track, name-checking jazz greats from Louis Armstrong to Terence Blanchard – add considerable sparkle to the grooves.

Lou Christie, What Was the First Album You Ever Bought?