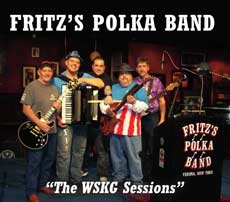 The Verona-based Fritz’s Polka Band is releasing their new album today (Friday, November 1), and there are a number of reasons why the album holds a special significance:

1.) The WSKG Sessions is a 2-CD live set and the first recordings the band has released since the death of founding member-accordionist Fred Scherz in November, 2009.

2.) Recorded in February of 2012, it’s also the final FPB recording to feature guitarist Tom Campbell, who has since retired from the band.

3.) Astonishingly enough, The WSKG Sessions is Fritz’s Polka Band’s 18th album. That right, they’ve got 18 albums to their credit.

And if for some reason, you don’t think that a polka band can be cool, well, you’re just missing the point here. Not only is Fritz’s Polka Band the only polka band to perform at a Woodstock Music Festival (in Rome in 1999), but two of the band’s songs – “Grandparent’s Polka” and “Here Is Fritz’s Polka Band” – were featured in episodes of the smash hit TV show, “Breaking Bad.”

And if that ain’t cool, I don’t know what is…