On Lou: An Uneasy Appreciation 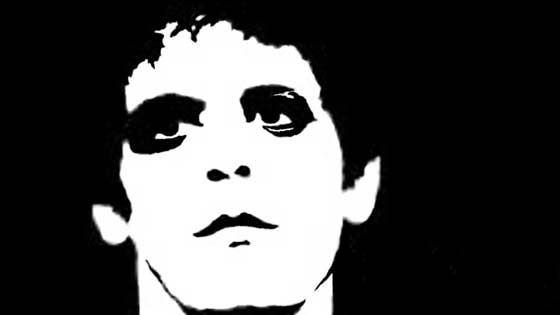 Peggy might charitably be termed an unreliable narrator, so what follows may or may not be true. The details lend a certain verisimilitude, but Peggy was notorious for inventing details. For all I know she wasn’t even there – as a minor, she certainly shouldn’t have been, but bouncers often found her very persuasive. Anyway, it’s just a story.

May 1978 – perhaps the 15th, the nights are still chilly. Lou Reed is holding court backstage at the Bottom Line. Not in his dressing room (which is either too cramped or simply sacrosanct, hence off limits to the hoi polloi), but in an improvised reception area with five or six picked-over deli trays and three last bottles of Heineken standing sentinel in a vast silver tub. The crushed ice had turned to tepid Croton water hours ago.

Lou is perched on a gray metal folding chair, legs crossed, hunched over and intently studying his cigarette while everyone else studies him. Peggy never sees him take even a single puff – the Marlboro’s sole purpose is to generate ash that Lou nonchalantly flicks on the beer-stained carpet, like a naughty boy daring anyone to offer an ashtray. This being Manhattan, no one is unhip enough to do so, even though there must have been half-a-dozen ashtrays within easy reach.

Various and sundry supplicants shuffle past, some literally bowing – perhaps hoping to get a better viewing angle on the great man’s face, wreathed in smoke as if he were auditioning for a Blue Note album cover. They’re all dressed in black, and they all say something inane or at least banal, like “great show, Lou, fabulous, simply amazing.”

In truth, it had not been a great show. Lou is in his sub-Lenny Bruce phase, cracking half-witticisms like “Robert Christgau is a toe-fucker” while an undistinguished band vamps endlessly on the same chords for five, ten, sometimes fifteen minutes. The dirge-like version of “Pale Blue Eyes” had a certain Teutonic grandeur that Nico would have appreciated, and some of the more recent songs off Street Hassle seem to pique Lou’s interest occasionally, but his disinterest in disinterring his greatest hits is palpable. It had not been a great show, but then again candor is rarely ushered backstage.

A distinguished looking gent – a lit professor no doubt, he seems straight so let’s make him from Vassar – wearing a turtleneck (black, of course) and a well-tailored black sport coat presents Lou with a silver cigarette case engraved with the initials LR and inlaid with Warhol’s famous banana rendered in azure. “I just want to thank you for making Berlin, Lou. That record saved my life. I mean, literally saved my life.” He is very earnest.

Lou looks up. He smiles, perhaps for the first time all evening. “We all make mistakes sometime, man,” he snarls, quietly but with some contempt, staring straight at the poor guy, waiting for a reaction. A couple of people who were close enough to hear laugh nervously, perceiving the put-down, wondering if a confrontation will ensue, but the guy just stammers for a moment or two and then squeezes out (in a noticeably higher register) “Well, thanks Lou, thanks for a great show.” Crisis averted, next in line, move along please, the Pope must return to the Vatican soon…

True or not – I tend to think not, the gleam in Peggy’s eyes as she told the story was that of a fabulist – playing the tough guy was Lou’s shtick for many years: the not-so-lovable curmudgeon, a younger hipper and thankfully less hirsute Andy Rooney, but with a sharper edge, withering putdown always at the ready. What did Lou name the first band he assembled after leaving the Velvet Underground? The Tots. You have to wonder what that did for their confidence, a motley collection of tyros from Long Island getting their first (and last) break, and yet they play rather beautifully behind Lou on the semi-legit American Poet import.

The cranky persona must have served Lou’s purposes in some way or another – otherwise why maintain it for so many years? In the sixties Lou’s confrontational attitude was an intriguing counterpoint to the prevailing peace-love-and-hash brownie vibe. By ’73/’74, Lou had cultivated a definite “Clockwork Orange” gestalt – stick-thin from way too much speed, his hair close-cropped and dyed a rather hideous yellowish blonde, seemingly willing to flout all conventions of drug abuse and sexuality. By ’78, two years after punk had reared its spotty head, Lou was finally in step with the times for fifteen minutes or so, armed with ditties like “Leave Me Alone” and “Dirt.” In truth, the tempos Lou favored were more Sabbath than Sex Pistols, but the sneering condescension and the style – never underestimate the impact of style! – were familiar enough to bring grudging respect from all the young punks.

Over the ensuing 35 years, Lou’s career waxed and waned – everyone loved The Blue Mask; Mistrial was god-awful; New York the miraculous comeback; Magic & Loss was heavy; Set the Twilight Reeling rather slight. Lou became something of a fixture on the cultural scene, a crotchety elder statesman who had undeniably earned his lofty perch on Mt. Olympus.

While the persona may have been off-putting (willfully so) and one-dimensional, it never really concealed what a perceptive and downright sensitive lyricist he was, a leather-clad romantic more likely to wield his switchblade on the stem of a rose than in a street fight. From “Femme Fatale” and “Sunday Morning” on the first Velvets record to “Candy Says” and “Pale Blue Eyes” from the third eponymous album and on through “Satellite Of Love” and “Perfect Day” (both from Transformer) and then “Coney Island Baby” and “Legendary Hearts” (both title tracks) and culminating in New York’s “Busload Of Faith” – you could make an easy listening Lou mix, and, damn, if it doesn’t break your heart and then mend it well you must be dead, too. This is the Lou that I treasure and the Lou that I will miss the most.

Peggy’s been gone for many years, and now Lou has joined her. I wonder if he’ll even remember the very young girl with long brown hair and haunting gray/blue kaleidoscope eyes, a devil dressed all in white in a roomful of black, standing in the back corner taking everything in and then, much like Lou, tearing up the truth and rendering everything so much more vivid than it really was. Save the last Heineken for me, you beautiful, beloved, god-blessed assholes.

Universal promises a three-disc deluxe edition of the Velvet’s second LP White Light/White Heat on December 10. This is not the romantic Lou, but rather the Lou who played guitar as if he was at that very moment receiving electro-convulsive therapy (aka shock treatment, for all you Ramones fans out there). In contrast, The Velvet Underground (the eponymous third album) is by far the prettiest of all the Velvets’ records. 1969: The Velvet Underground Live and Live at Max’s Kansas City are two of rock’s earliest authorized bootlegs: dodgy sound quality, but the song selection and the sequencing are impeccable. Both of these records are deeply affecting – indeed Max’s has been proven in non-scientific trials to alleviate depression.

The Velvet Underground: Playlist Plus is a near-comprehensive three-disc overview of the Velvets’ career, while the two-disc Gold will likely suffice for those on a budget.

Transformer is definitely the best-produced (and the most lavishly arranged – what’s Rick Wakeman doing on a Lou Reed album?) of Lou’s solo efforts. The twin-guitar wank of the live Rock’n’Roll Animal is likely to please guitar fetishists. Coney Island Baby remains vastly underrated, especially if you can tolerate goop. Doesn’t anyone else appreciate “A Gift,” wherein Lou croons “I’m just a gift to the women of the world”?

Live in Italy boasts both a strong set list and the brilliantly idiosyncratic guitar work of Robert Quine. New York and Songs for Drella (the latter a collaboration with former Velvet cohort John Cale, paying tribute to Andy Warhol) are both damn near essential. The two-disc NYC Man – subsequently repackaged as Essential Lou Reed – is the best of many compilations.