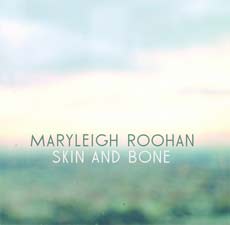 Saratoga singer-songwriter MaryLeigh Roohan celebrated the release of her new solo CD, Skin and Bone, with a party and performance at the Parting Glass in Saratoga Springs earlier this month, now she’s headed down to The Linda in Albany to do it all over again on Saturday night (November 23).

But make no mistake about it, this is Roohan’s album. And after stints with MaryLeigh & the Fauves, Babe City and Party Boat, Roohan steps out on her own with stunning results. The album opens with a country-rock trot through “Coward,” but Skin and Bone cuts a wide swath across musical genres, and Roohan never paints herself into a corner. She touches down on the blues (the ballad “Running”), pop (the soaring “Never Left You”), swamp-soaked funk-rock (the wailin’, party-down “Get Me Home”), Latin-tinged jazz (the shimmering, seductive “Loose Ends and Riverbeds”) and chamber-folk (the closing “Baby You Should Know”).

Yes, it’s an eclectic mix, but it all hangs together perfectly thanks to Roohan’s musical vision, her wiser-than-her-years lyrics and an undeniably powerful, passionate voice.

Roohan’s considerable talents have already attracted the attention of the Jersey-based indie, Fake Chapter Records, who will be releasing the digital and vinyl versions of Skin and Bone in January – you can pre-order here. And you can bet that a lot more folks will soon fall under the spell of Roohan’s mesmerizing music.