Box of Stars’ “Last Box of Sparklers: A Tribute to Mark Linkous” 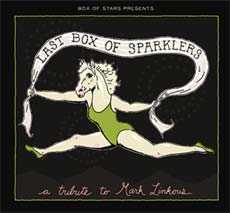 Box of Stars is a non-profit organization with the mission of promoting mental health awareness through music. As they state on their website, “By shining a light on the stories and music of musicians we admire, and whose lives and work have been effected by struggles with mental health, we hope to reduce the stigma associated with mental illness, increase awareness and effect positive change.”

Through Indiegogo, Box of Stars has launched their inaugural project, Last Box of Sparklers: A Tribute to Mark Linkous, a double-album featuring a variety of bands covering songs by Mark Linkous’ Sparklehorse. The crowd-funding campaign runs through 12midnight on Friday, November 29.

And the album has its roots in the Local 518, as Marc Fuller of Edie Road Recording Studio in Argyle was a moving force behind the project, in addition to recording many of the contributions. And there’s a strong local presence in the music, too, with some of Nippertown’s finest musicians and alum – Phantogram, Eric Margan and Lip Talk (formerly Railbird) – represented on the album.

GO HERE to check out some of the musical contributions…