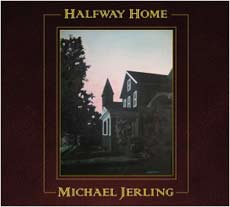 Halfway Home is a marvelous new album from veteran North Country singer-songwriter Michael Jerling. It’s the follow-up to his 2009 live album Music Here Tonight, which was recorded in concert at Caffe Lena. It’s also his first album of all new material since 2007’s Crooked Path, but it was worth the wait, jam-packed with 14 songs.

Recorded at his Fool’s Hill Studio in Saratoga Springs, Jerling is joined by his regular musical sidekicks – Tony Markellis on bass, Teresina Huxtable on reed organ and accordion and Danny Whelchel on drums and percussion, as well as special guest contributions by Danny Gotham on mandolin and nylon string guitar, Victor Sanders on electric guitar, Kevin Maul on slide guitar and Mike Vlahakis on keyboards. In addition, Don & Victoria Armstrong, Bob Warren & Joy MacKenzie and Dale Haskell chime in with their distinctive voices.

Not only a multi-talented musician – he plays guitar, mandolin and harmonica on the disc – Jerling is also a masterful craftsman, a songsmith with a confident strength and a keen eye for the details that bring his eloquent songs to life. He’s a magnificently understated vocalist with echoes of such masters as Guy Clark, John Gorka and Lyle Lovett. And just when you figure you’ve got him figured out, he effortlessly shifts gears to crank out a bluesy anthem (“Bigger Hammer”), a wry Tin Pan Alley stroll (“Personal Appearance”) or a lilting samba (“No Solid Ground”).

Michael Jerling celebrates the release of “Halfway Home” with a performance at Caffe Lena in Saratoga Springs at 8pm on Saturday (January 4). He’ll be accompanied by Teresina Huxtable and Tony Markellis. Veteran Canadian singer-songwriter Lorne Clarke opens the show. Tickets are $16 in advance; $18 at the door.