Review and photographs by Jason Spiro

Dave Mason’s concert at The Egg on Saturday night was preceded by a slideshow of images, archival photographs that illustrated Mason’s long and storied history in the field of rock, blues, etc. A soundtrack played along with the images, that sounded not unlike modern remixes and covers of classic rock, but were more likely Mason’s originals of his oft-covered songs.

The show was advertised to begin at 7:30pm, and so began promptly at 7:48, perhaps to allow this crowd time to amble in – with scents of patchouli nearly ever-present, one loyal service dog for the aged, and much greying of hair progressed far beyond mere temples or sideburns – but more probably in deference to time honored tradition of holding the show. Yes, a polite crowd, with a few rabble rousers, but mostly quiet and not prone to dance, even upon urging from the band. But at least they weren’t supine.

I kid, of course, because I was in awe of the band, and thus I respect anyone who braved the cold and took advantage of the opportunity to see a bit of rock history played out memorably in the present. It is to my elders’ credit, those who grew up with these songs as tweens, teeny boppers, mods, hippies, Yippies, et al., that they came out, if you like, to show them, that there is an audience for this stuff, even on the night following a snowpocalypse. (Would that the kids would see… The same brain frazzled noodle dancers who pay hundreds to tour with (take your pick) could instead invest a fraction of the time and money to see an outfit with real, vested, undeniable provenance.)

The multimedia presentation, such as it was, was mostly unnecessary. It provided some visual stimulation and served as a buffer against silence or a widget-like pre-show. The crowd talked over the music, and while the screen was big and beautiful and the projector had many lumens, it didn’t really help sell the show or entertain all that much. It just let the few stragglers in the mostly promptly arriving crowd have time for their smoke (or patchouli break) before being seated.

Dave Mason’s Traffic Jam took the stage and immediately launched into an incredibly impressive set of music. The sound was exceptionally well mixed. One had the experience, virtually, of being at a Tanglewood or SPAC with the advantage of an acoustically superior indoor space. This tinnitus sufferer came away from a nearly two-hour show with no ringing of the ears, yet it felt very loud in there, dBs pushed to the max without any feedback or distortion. 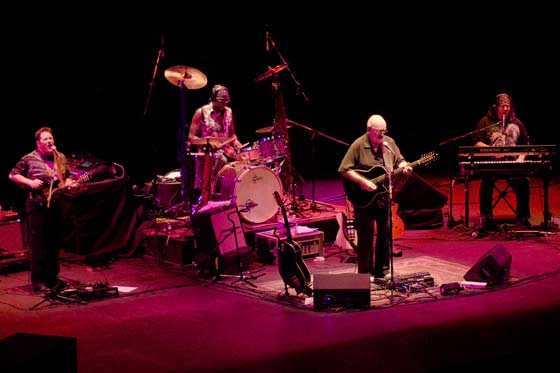 Mason emceed the show, introducing his band, calling the tunes, and raconteuring throughout. He reiterated one story twice, his primer on UK geography, about the place of his birth, in Worcestershire, England (with the Lee and Perrin sauce referenced for mnemonic and pronounciation purposes), and the birthplaces of various musicians he grew up with, played along side, and so forth, ie. Steve Winwood of the Spencer Davis Group.

Dave Mason’s voice and guitar chops are in great shape, and after an evening on a variety of electric and acoustic guitars – notably, the twelve string – he shredded on his Strat. Mason was most evidently the guy with the monster chops, pulling out a variety of tight and well-phrased guitar solos as the night progressed. Mason let guitarist Jason Roller shine on early solos. Roller also also comped on mandolin, and added chorus harmonies. Keyboardist Anthony Patler, with his mix of modern and classic synth and electric piano sounds, handled vocal duties as well as, if not with the same incredible command as Mason. So it was with drummer Alvino Bennett thoroughly in the pocket. With Patler also handling the bass duties, the four-piece really did the work of five or six.

Without the clutter of excess percussionists or other afterthoughts, the band was able to completely fill out the sonic space with plenty of room for phrasing or vocal expression. Mason benefitted from a competent sound crew, who both got him in the right space EQ-wise and punched in extra touches of reverb or echo on his vocals when warranted.

Mason drew from an impressive stock of tunes that he wrote or cowrote, then ventured into what he called Dave songs, or Dave territory, stuff you’ve heard just as much as the Traffic songs. He introduced “Feelin’ Alright” by saying, in essence, “Joe Cocker popularized this one, but I wrote it.” All the shouted crowd requests were covered by the set list or in the encore. There were swampy blues numbers, ’60s-’70s rockers, some soulful ballads, and no small number of timeless classics. He managed to rescue “All Along the Watchtower” from its delivery to purgatory by Dave Matthews, reviving it – and songs like “Dear Mr. Fantasy” – with real vigor, emotion and immediacy.

He’s a funny guy, and gracious, too, without a trace of UK accent. It’s unsettling, listening to this man expound or expand upon his history, sounding like he’s from somewhere in the middle of the Atlantic Ocean. Mayhaps we’ve grown too accustomed to Doctor Who, or worse the Geico lizard, but who talks like that? I was scratching my head. He kept the crowd involved with many seemingly off-the-cuff quips – responding rather humorously to one female attendee who proclaimed, “Hallelujah,” with a few seconds pause, a turn to the mic, and… “Right on.” 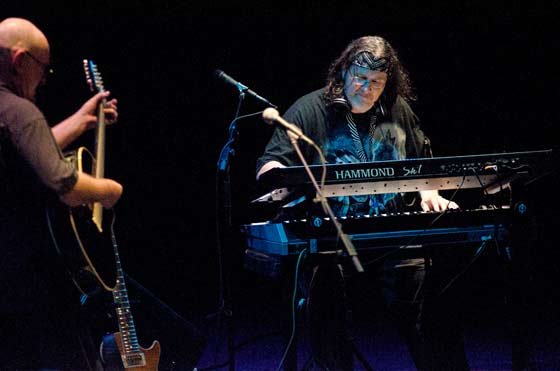 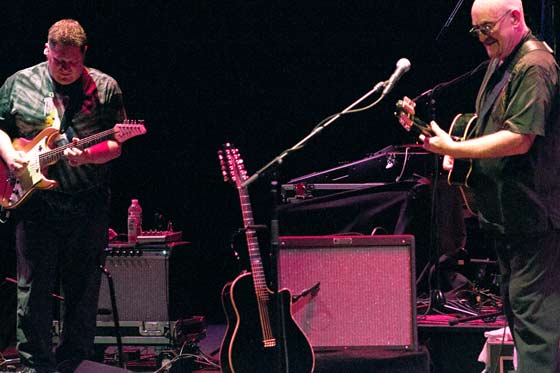 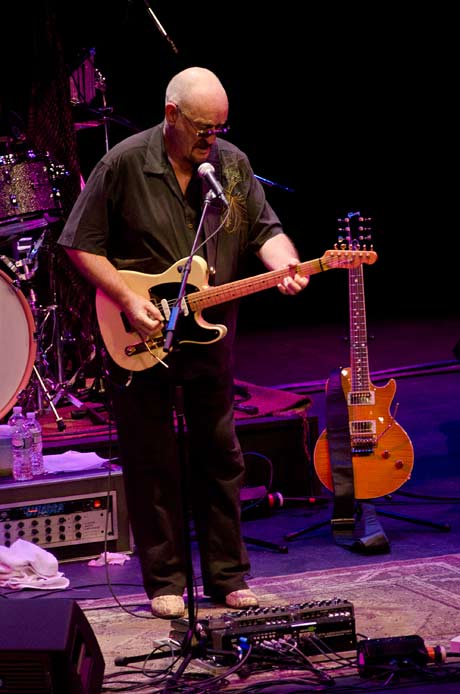 JAZZ2K: CD Picks of the Month