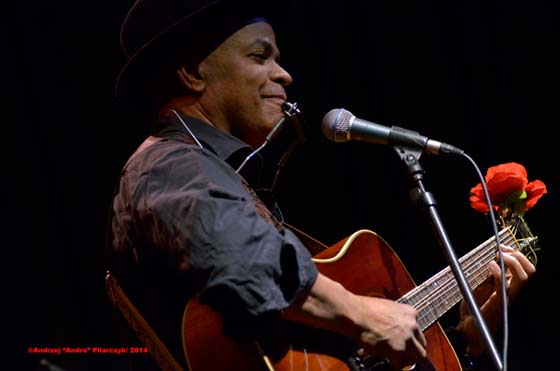 Guy Davis prefaced his lightning-fast opening number at The Linda by saying, “I’ve stolen so much, this song doesn’t even have a title!” And even if he hadn’t name-checked Charlie Patton and Blind Willie McTell after it was all over, the SRO crowd could easily hear about 100 years of the blues coursing through Davis’ acoustic 12-string guitar, right down to the off-time beat that recalled Robert Johnson’s original version of “Crossroads.” But as Davis says he tells his students, “It’s okay to steal music – but once you steal it, you have to earn it!”

Davis definitely earns his keep. A scholar of the blues who once paid the rent as a cast member of the soap opera “One Life to Live,” Davis pays mad respect to all those who came before him by mixing their sounds into his music – that’s when he’s not breathing shining life into some of the genre’s many touchstones with either his 12-string, his six-string (which had a rose stuck in the tuning pegs) or his banjo. That last instrument might raise an eyebrow or two; it certainly did for the English music critic Davis lampooned in one of his hilarious pre-song raps. But when Davis laid a chugging take on Muddy Waters’ “I Can’t Be Satisfied” on us, I swear I could hear a freight train whistling by.

With his jeans, his suspenders, and his fedora with the turned-up brim, it would be easy for the uninitiated to mix up Davis with Keb Mo, but there are plenty of differences. For one thing, Davis doesn’t have nearly as “pretty” a voice as The Artist Occasionally Known as Kevin Moore – and that’s actually a good thing: If rock & roll isn’t pretty, then the blues is downright ugly, as we saw during Davis’ dead-on version of St. Louis Jimmy Oden’s “Goin’ Down Slow.” (“I don’t know why I’m singing this sad, depressing song,” Davis opined before playing his erstwhile closing number. I’m thinking it’s because it’s the real deal, and Davis plays it splendidly, both on guitar and harp.)

For another thing, you may learn a lot about Keb Mo at a Keb Mo show, but you won’t learn a lot about the blues. Davis claims, “I have to come up with all these stories because I tune so much,” but he also likes to serve up the blues with a side order of knowledge. For instance, until Davis played “Saturday Blues,” I never knew there was a musician named Ishman Bracey. (“Ishman’s the kind of name you give your kid when you WANT him to run away before he’s 15,” Davis cracked.) And until Davis introduced his glorious first-set closer “Did You See My Baby,” I never knew the producers of the Broadway show “Finian’s Rainbow” created a character for blues-harp icon Sonny Terry to play so he could appear in the original 1947 Broadway show. All Davis needed to bring the spirit of Terry into the room was a harmonica and his two stomping feet, because The Linda’s raised stage made a terrific drum kit.

Mind you, Davis doesn’t have to tell stories to give people an education – all he has to do is play! With no back-up musicians and a handful of stomp boxes (“I got all kinds of pedals and toys…”), Davis laid down Old School tunes the way they might have been heard the first time: His take on McTell’s “Statesboro Blues” would be well-nigh unrecognizable to anyone who only knew the Allman Brothers’ version, and he infused Willie Dixon’s ”Little Red Rooster” with a Sun Records-style echo that made his guitar even more percussive. Davis also exposed us to “a great, black bluesman named Bob Dylan” with his hushed take on “Lay Lady Lay”, and paid loving tribute to the late Toshi Seeger (“That’s our girl. She ran the Hudson…”) with a sing-along version of “Love Looks Good On You.”

The other thing to see Guy Davis is that the man is just too much fun, particularly when he plays his own tunes like “Shaky Puddin’” and his encore “Blackberry Kisses.” (“That’s got nothing to do with a digital device,” he grinned.) A friend of mine describes his lyrics as “bawdy,” but the truth is there’s more double entendres in Davis’ “Chocolate Man” than you can shake a stick at. Then again, not all the songs he plays are aimed at making Mike Huckabee faint. Davis prefaced “What You Doin’” by explaining the piece’s primary lyric (“You got to give in kind/Just for what you doin’…”) is “a country-folk way of saying, ‘What goes around, comes around.’”

Davis gets a lot of calls to play schools nowadays, and he’s more than happy to do it – although he admits his motivations aren’t completely altruistic. “I want the kids to learn a little something about the blues… but in about 15-20 years, I want them to be my audience! So when they roll me out…” He did a quick impression of himself in a wheelchair at some indeterminate-but-infirm age. The he laughed, “I’ll be there! I’ll be playing!” And with any luck, so will we.

SECOND OPINIONS
Excerpt from David Singer’s review at The Daily Gazette: “Davis, a one-man show who has modernized the delivery of Delta blues, played a host of songs young and old with guitar, banjo, harmonica and a huge growl of a voice. A writer, an actor from soap operas and off-Broadway plays, but a musician first, he filled the night with traditional blues tunes and wide-ranging, hilarious stories that may or may not have been true, he warned. Davis had the audience bark like dogs and howl like wolves at the appropriate times during Willie Dixon’s ‘Little Red Rooster.’ The standing-room audience consistently howled and barked with surprising vigor, setting the tone for the night. Before singing ‘Can’t Be Satisfied,’ he talked about playing the song in the Royal Albert Music Hall with England’s Queen Elizabeth, Prince Philip and other royalty in the audience. He said not to be too impressed, ‘it may not be true.'” 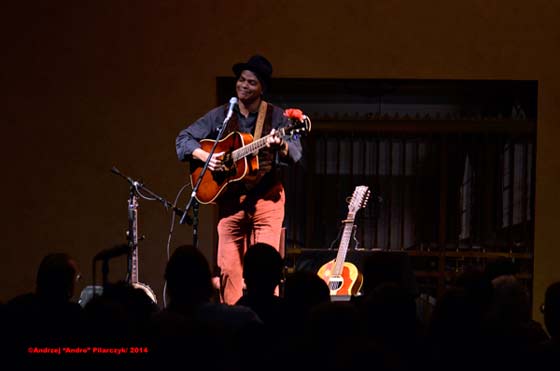 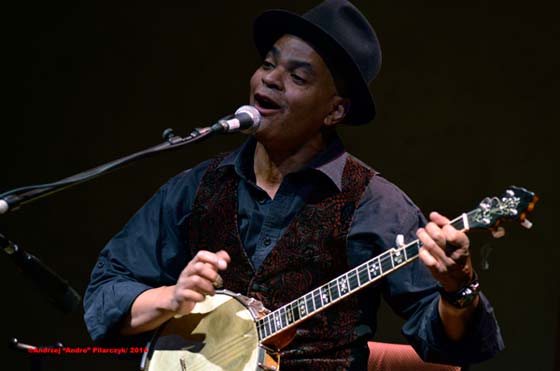