New Release Rack: Sandy McKnight & the Idea’s “What Did You Expect?” 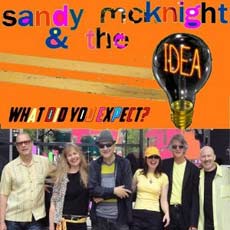 A mixture of surf, ’60s rock ‘n’ roll and folk revival, ballads and a hint of smooth jazz, country-rock, and waltzes – what an idea!

Sandy McKnight & the Idea’s album What Did You Expect? (released in late October, 2013) gives the listener a large range of styles over 12 tracks which mesh perfectly together. From the opener “Never Miss a Trick” to the closer “Setting the World on Fire,” you’ll be hooked on this idea. Because of its catchy melody and chorus, “Never Miss a Trick” will get you hooked right at the start of this album. With a surf and pop-inspired sound and four-part harmony by Liv Cummins, Jennifer Bennett, Dave Labrecque and Craig Hazen, you’ll be singing along in no time. With Johnny Easy completing the live line-up, what else would you expect from a cast of experienced musicians like the ones Sandy McKnight brought together?

“Someone.” a catchy and lyrical song, covers up the pain and struggle of the people in the song with a light-hearted sound. By going from a soft, cheerful sound during the verses to a harder rock sound during the chorus and interludes, it accentuates the deeper meaning of the lyrics. Former David Bowie guitarist Earl Slick also makes a cameo on this song playing guitar and the enthralling and gripping fuzz guitar solo.

“No One in This World” musically shifts to a slowed-down love ballad. Many people view love songs as sappy and empty, but McKnight creates a depth with his heart-wrenching lyrics and somber instrumentation. Even Slick’s guitar solo cries and wails for the lost love. The harmonies and synths in this song also give a haunting effect. After listening to “No One in This World,” you’ll have a new outlook and appreciation for love songs.

Following “No One in this World,” “Say What You Want To” goes back to the original pop and ’60s-inspired sound. With Labrecque’s beginning guitar riff, it segues into a catchy, radio-worthy song. This song is easy to sing along to and will make you want to get up and dance. Including a ’60s folk revival-sounding tambourine, catchy harmonies and another superb guitar solo by Slick, you’ll soon be kicking up your heels and singing along.

“Tangerine” brings about a whole new sound on this album. Catchy and ready for the radio, the tune mixes country-rock with uniquely dreamy-sounding guitars and keyboard. To add to the whimsical lyrics, the whistling at the end works perfectly.

And that’s only half of the songs on What Did You Expect? The whole album gives the listener a wide array of styles to listen to. With each musician’s experience and creativity, the songs were created by musical artistry that is spread throughout this album. With McKnight’s lyrics and the insightful, creative instrumentation, every listener will find at least one song to love.

What Did You Expect? is available on iTunes and Amazon.com.

Kanye Quote of the Day #2