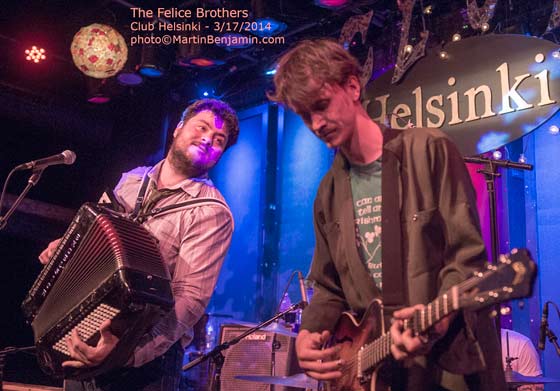 The Felice Brothers delivered a spirited and ramshackle performance on St. Patrick’s Night at Club Helsinki in Hudson. Starting with a set list of 32 songs at their feet, they delivered a dozen of them before diverting from the list and calling an audible. Sadly, a dozen songs into it, “It’s a Wonderful Life” was skipped on the set list. Perhaps the room was getting too rowdy for a selection that quiet and sensitive, so they barreled ahead with faster rollicking material, which was more appropriate for this holiday drinking Monday night crowd. While playing lots of familiar stuff, there was an Irish tint to some offerings as well. And they did deliver some surprises.

Ian introduced a song identified as “Lion” on the set list as “a new song for us.” He introduced another as “a song we never played before, but it going to be fun. Real fun!” With that setup, they dove into the traditional country bluegrass “Rocky Top” in a revved-up fashion, with Ian throwing in some fabricated lyrics during his turn at the mic. Ian also delivered “Mistral Boy” (aka “The Minstrel Boy”), describing it as “the first song I ever learned to sing when I was a boy.”

I’d never heard the great and bouncy “Cherry Licorice,” which has rhymes and lines of:

“High along the hill
through the thistle,
past the factory,
across the trestle,
teachers slit my wrists
for every class I missed.

All I want to eat is cherry licorice,
I don’t care if it sounds ridiculous,
Even the birds and bees
eat what they damn well please.

He was like a fire,
she was like a feather.
It was hell to live together.
I bid them all so long,
I am glad those days are gone.”

The long set was exhilarating, and they saved the best for last. The final song of the evening and encore was Neil Young’s “Rockin’ in the Free World,” and it was a fitting ending following songs about “Whiskey in My Whiskey,” “Cherry Licorice,” “Dead Dog” and “Dirty Ol’ Town.”

The boys also guaranteed that spring was coming. Having just returned from SXSW in Austin, Texas, James exclaimed that they had just seen a big, round, yellow thing in the sky that warms you and makes you feel good all over and that it is heading this way. The Felice Brothers are a good way to help push winter out of here. They certainly brought an abundance of warmth to Club Helsinki for St. Patrick’s Night.

Kentucky singer-songwriter Dawn Landes performed an opening set and joined the Felice Brothers to sing back up on a couple of tunes. 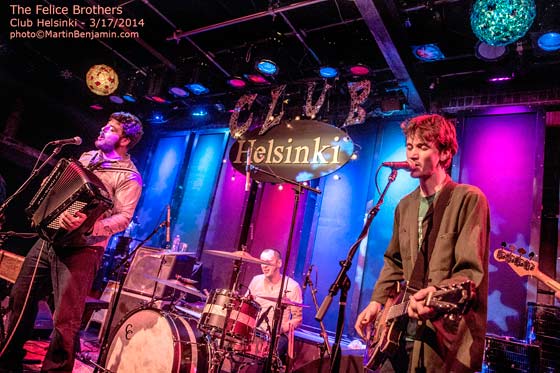