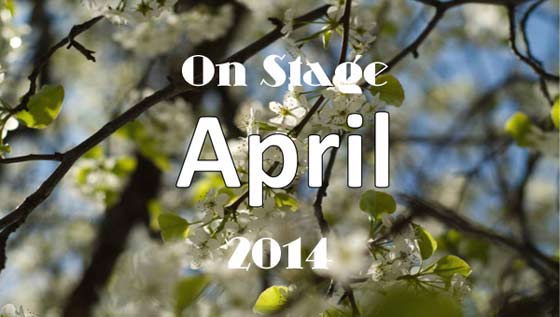 As winter melts into spring, the light changes and the spirits rise with the season of optimism. This upbeat feeling is reflected in the increasing beat of the programs that take place in the coming weeks. Some are nearby, others further away, and still others did not make our deadline for inclusion in this compilation. Still one thing is clear, the beat of our cultural life is quickening.

Mike Gordon and his latest fivepiece project comes to the Hunter Center on Saturday (April 5) at 8pm. He will be joined by Scott Murawski (guitarist), Craig Myers (percussion), Tom Cleary (keyboards) and Todd Isler (drums). At 3pm, before the concert, Gordon and Murawski will host a special song dissection in Club B-10 at MASS MoCA. Gordon will take fans on an intimate journey through the creation of a song (from inception to completion) from his new album. This event will be available to a limited number of concert ticket-holders. It will be followed by a Q&A session. Details on how to obtain a spot to attend the song dissection and Q&A will be announced shortly. Ticket info can also be had by calling 413.662.2111 x1 during box office hours or purchased online at massmoca.org.

Chronicling the innovations in ingredients, technologies, meal service and cuisine that transformed eating in public in ways that persist to this day,“Repast or Dining Out, 1900 – 1910” is the subject of a Tea and Talk to be presented at Ventfort Hall Mansion and Gilded Age Museum on Saturday, April 5, at 3:30 pm. The illustrated program will be given by historian Michael Lesy and his wife, Lisa Stoffer, who comes from a family of chefs. They are co-authors of a new book titled “Repast: Dining Out at the Dawn of the New American Century, 1900–1910.” They will be on hand to autograph copies during a Victorian tea following their lecture. The duo will take the audience on a culinary tour of period restaurants and dining, starting with the simplest eateries and foods and culminating with the emergence of a true American way of fine dining. They will examine how evolutions in dining reflected social, political and technological changes that cut across class, gender and ethnic lines. Tickets for the Lesy/Stoffer Tea and Talk are $18 for advance reservations and $23 day of event. For more information or reservations, call Ventfort Hall at 413-637-3206 or www.gildedage.org . The historic mansion is located at 104 Walker Street in Lenox.

This Is Not an April Fools Joke! Headliners Announced for Rock Fest in Saugerties