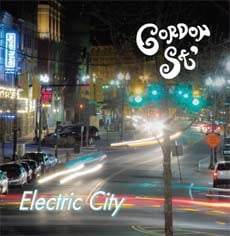 Gordon St is gearing up for this weekend’s release of their sophomore EP, The Electric City, and the rockers are celebrating with a free concert at Freedom Park in Scotia at 7pm on Saturday (June 21).

Titled for the band’s Schenectady base of operations, The Electric City is a diverse collection of three original songs – “Motion of the Ocean,” “Such a Fool” and “Ripcord” – that showcase Gordon St’s talent at blending multiple rock genres, all underscored with a danceable beat.

“The songs are a bit more grown-up, but they don’t sacrifice the underlying aspect of fun that has always summed up what we’re going for,” explains singer-bassist Dan Noonan. In addition to Noonan, the band features guitarist Ritch Harrigan, drummer Dennis Fatato and keyboardist Mark Bertini.

The Electric City – the band’s follow-up to their 2012 debut, Telenovella – was recorded with engineer John Chiara at Albany Audio.

And if you can’t make it to Freedom Park on Saturday for the band’s CD release party, you’ll have another chance to catch Gordon St in action at 6:30pm on Friday, June 27 at Cafe NOLA in Schenectady.

WTF: Lauren Ambrose and Chris Pine Are Out; Nina Arianda and Sam Rockwell Now in “Fool for Love” [Berkshire on Stage]

Tony DeSare Comes Home for the Holidays at the Strand, Dec. 16-18

Tony DeSare Comes Home for the Holidays at the Strand, Dec.…