Like a Bad Penny, Peter Schickele Brings PDQ Bach Back to the Colonial Theatre [Berkshire on Stage] 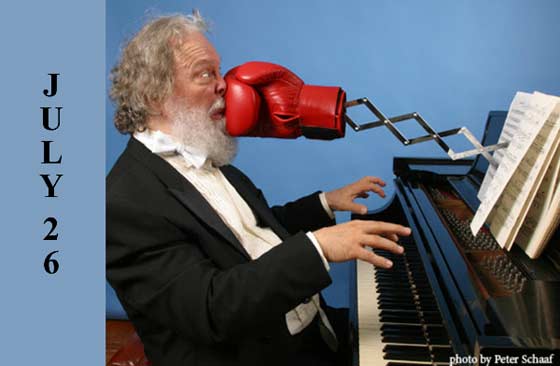 NOTE: Larry Murray reminisced with Professor Peter Schickele about the imaginary P.D.Q. Bach which you can read here. There is also a rare photo of the tromboon, part trombone, part bassoon which Bach invented.

Musical humorist Peter Schickele will perform 50 Years of P.D.Q. Bach: A Triumph of Incompetence at the Colonial Theatre in Pittsfield on Saturday (July 26) at 8pm. It’s been 50 years since Professor Peter Schickele released P.D.Q. Bach on an unsuspecting musical public. And it’s been 80 years since the professor’s mother released the professor on an society ill-prepared for such singular genius. And now, because everyone loves a birthday, Professor Schickele has reached back across the decades to explore the damp vaults and dusty attics of Leipzig to once again celebrate the twenty-first child (out of twenty) of the great J.S. Bach. This special, once in a half-century, musical extravaganza will feature the crème de la crème of history’s most justifiably neglected composer.

Peter Schickele will perform twelve “quite heavenly songs” including: musical upsettings of the signs of the zodiac (for chamber ensemble), excerpts from The Notebook for Betty-Sue Bach (for solo piano), and songs from Shakespeare: The Bard’s most famous speeches set to 1950′s rock ‘n’ roll (for piano & chamber ensemble).

One thing that Peter Schickele and P.D.Q. Bach have in common is their love of writing party music. Mr. Schickele has composed rounds, songs and piano miniatures which have served as presents, congratulatory messages, homages, bread and butter notes (notes, get it?) and simply as something new to bring to sight-reading parties. He has been writing such pieces since he began composing during his early teenage years, and he continues to do so with undiminished enthusiasm; sometimes the results turn out to be among his best works.