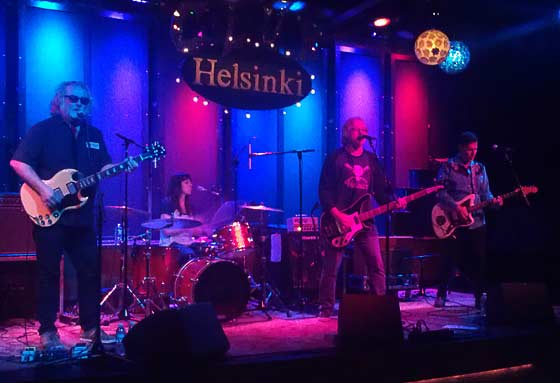 By the time the Baseball Project roared into Hudson on Wednesday, they had played more than a double-header, appearing on “The Dan Patrick Show” and later on WAMC-FM (lunch was apparently quinoa burgers at Howard Glassman’s the Low Beat) before cruising south to Club Helsinki.

Despite the long day, the veteran rockers played with the spirit of newly signed bonus babies. Keyboardist Josh Kantor (who is also the official organist of the Boston Red Sox) threw the first pitch with some tasty ballpark sounds on his B3, and the band – Scott McCaughey (guitar/vocals), Steve Wynn (guitar/vocals), Mike Mills (bass/vocals) and Linda Pitmon (drums) – took the stage like the home team in the top of the first (OK, OK, enough of the baseball puns, but I could go all night).

For anyone who doesn’t know, this indie supergroup has released three albums of story songs about America’s pastime. From the obscure (Doc Ellis’ ejection for hitting three Cincinnati Reds in a row) to the infamous (A-Rod and Pete Rose), the band is a dream come true for those true blue-blooded Americans who love their baseball with a side dish of power pop.

Mike Mills couldn’t resist the baseball puns either. “Tonight’s game has been rained out,” he joked at center-stage, a nod to the pouring rain that soaked Hudson and probably hurt the mid-week concert attendance. Then Steve Wynn continued the insider-baseball comedy, claiming that Club Helsinki Hudson was in fact named after ace pitcher Tim Hudson.

Though their comedy skills may have been no better than mine, these rock hall of famers (at least Mills actually was inducted with REM) were in fine form on Wednesday, ripping through most of their latest album 3rd (Yep Roc, 2014). Former Young Fresh Fellow McCaughey and former Dream Syndicate founder Wynn traded lead vocals on most numbers, while REM’s Mike Mills took a turn on “To the Veteran’s Committee,” his passionate plea for Atlanta Brave great Dale Murphy’s inclusion in Cooperstown.

The band catered to the northeastern crowd, playing a “Red Sox mini-set” that included the Italian operetta about lovable Tony Conigliaro (“Tony”) and a lament of the move by then-general manager Dan Duquette that sent Roger Clemens to Toronto and later New York where he piled on the Cy Young awards. Yankee fans had something to cheer about with the Bernie Williams tribute “Monument Park.” They also were given the opportunity to jeer A-Roid (“13”) and applaud the massive – and massively entertaining – ego of Reggie Jackson (“The Straw that Stirs the Drink”). Despite the number of Mets t-shirts I spotted in the audience, the band played zero songs honoring David Wright, Mike Piazza or Casey Stengel, proving yet again that the Metropolitans are the Rodney Dangerfield of NY sports. They get no respect.

Other highlights of the show included the superb encore vocals of drummer Linda Pitmon on “Pascual on the Perimeter,” a jangle pop tune that actually sounds like it emerged in the CMJ years that helped all of these musicians build a career.

What struck me most about the Baseball Project is how the career of an athlete often fizzles quickly after the on-field career, while the modern rock musician can conceivably play clubs for 30-plus years. Of course, the Cal Ripkens and Derek Jeters of the world are set for life with big money saved and business plans for the retirement years, but so many mediocre gamers struggle to make ends meet by making appearances at car dealerships and gas stations.

While music culture has grown comfortable with ’60s and ’70s one-hit wonders relegated to the oldies circuit, it’s still alarming to see original ’80s indie rockers enter the grey-hair years — the years where being a working musician is more important that being a rock star.

While the set was hardly electrifying, it was clearly professional. Sometimes I wished Steve Wynn would wail a little more wildly on his Fender Jaguar or that Mike Mills would go back to Rockville and breakout an REM deep cut, but that didn’t happen. Wednesday was about faithful treatments of the songs as they appeared on the album, by a bunch of veterans who will hopefully keep doing what they do best for years to come. Next time, let’s hope Peter Buck (REM), who tends to trade bass duties with Mills in The Project, joins them on the stage.

While Club Helsinki has great sound and an exceptional staff, the club fails to deliver a true rock n’ roll experience. The 60-plus people in attendance all sat in seats during the concert with a very small dance space left for standing (this was only used by one obviously obliterated young man during the encore). Maybe the club needed more of said obliterated folks willing to dance. It’s hard for a rock band to feed off of a crowd that is mostly feeding itself like it’s dinner theater. While the club has a lot going for it in terms of ambience and beer selections, I just have a hard time getting into the groove when people at the table next to me are inquiring about whether or not they taste dill in their arugula salads.

NOTE: You’ll have another chance to catch the Baseball Project in action on Friday (August 1) when they join Conor Oberst and Dawes in concert at Brewery Ommegang in Cooperstown, kicking off the Baseball Hall of Fame’s 75th anniversary weekend.

THE BASEBALL PROJECT SET LIST
They Are the Oakland A’s
¡Hola! America!
Monument Park
The Day that Doc Went Hunting Heads
Pete Rose Way
13
They Don’t Know Henry
Tony (Boston’s Chosen Son)
Twilight of My Career
Buckner’s Bolero
1976
From Nails to Thumbtacks
The Straw that Stirs the Drink
Fernando
To the Veteran’s Committee
Jackie’s Lament
Past Time
ENCORES
Pascual on the Perimeter
Fair Weather Fans
Panda and the Freak