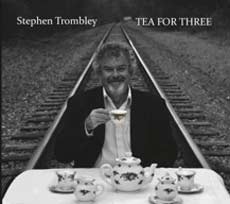 There’s a noticeable twang to upstater Stephen Trombley’s newest CD – and with good reason. Tea For Three is the Saratoga-raised songwriter’s first release since bolting from the Empire State for the music city skyline of Nashville, Tennessee. And while the six-song EP was written and recorded south of the Mason-Dixon line, Trombley’s studio comrades are men of the world – much like the author, filmmaker and musician himself.

“I first saw Suzie, down at the drive-in, smilin’ an flirtin’ with all of the guys,” Trombley sings in a melancholic jangle of a hopeful coupling born one October night. At the dawn of the New Year, however, we find our hero seated on a curb outside the clinic, waiting for his girl to emerge. The only thing that seems to work right is the radio inside his rusty old pick-up, which blares a Patti Smith tune about the vicious circle that turns and burns on a night that belongs to lovers. Later, he finds a farewell note beneath his windshield wiper that emanates with the memory of his girl’s dime-store perfume.

The CD clocks in at about 21 minutes. It features lazy saxophone breezes over strummy acoustic guitars and characters who flirt with doom but escape its clutches by taking to the open road – a star-filled sky and the endless sea guiding their escape – in a relentless quest for the eternal dream.

“I am a man of the world,” Trombley sings, comfortable in his own skin, a piece of a giant jigsaw puzzle whose whole is the sum of its global parts. “I don’t care where I am,” he sings, “’cause wherever I am… is home.”

Don Brewer, What Was the First Album You Ever Bought?