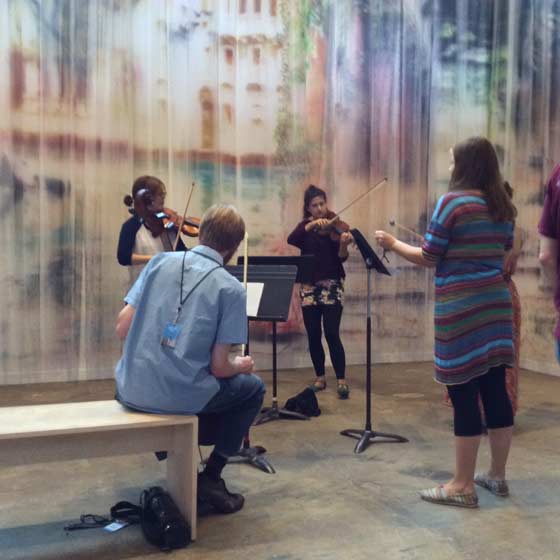 Review and photographs by Joel Reed

Long before MASS MoCA began hosting Wilco’s Solid Sound and the FreshGrass music festivals, the sprawling North Adams museum and performance space offered the Berkshires and the Capital Region unmatched opportunities for extended exposure to alternative music. In 2002, the NYC-based new music ensemble Bang On a Can began taking up an annual summer residency there with two weeks of concerts and recitals coupled with instruction for a small group of “fellows” eager to study extended technique and composition from the All Stars who launched a genre.

Though Bang On a Can’s founding composers and musicians are classically trained and mostly work with traditional instrumentation, their work refers more to late twentieth-century experimental or avant garde composition and rock than it does the orchestral and chamber music of the seventeenth through nineteenth centuries. As with all art, theirs is based in a set of conventions that become more familiar and accessible over time, but its relevance is less in doubt, and so their annual presence at MASS MoCA fills a unique niche in our region for those who are looking for world-class live music but aren’t turned on by SPAC’s classical season or rock reunion acts.

BANG ON A CAN FELLOWS: “IN C”
The first of the two programs I attended was a 4:30pm performance in the museum’s largest gallery of Terry Riley’s “In C.” I got a kick out of the ways the ensemble took advantage of the space, which had been split into a half-dozen temporary smaller galleries (each open at the top) to display Izhar Patkin’s painting cycle “Veiled Threats.” The audience could wander through the exhibition and find small groups of musicians everywhere, performing less as a large ensemble and more like intimate chamber groups. But there was a problem with this staging: if you were in any of the mini-galleries, the group playing there drowned out the rest of the performers. It was like being at a rock show with a bad sound mix. The only place I could appreciate the full piece was from a space between the small temporary galleries where I could hear “In C,” but not see any of the musicians playing it.

At a certain point however, the musicians filed back into a larger space at the far end of the gallery, where, though gathered together, they stayed in motion, grouping, degrouping, and reconfiguring themselves as they played. In this way a piece that has always alternated between the stasis of repeated patterns and flow of subtle variation became much more dynamic; I imagined MASS MoCA’s gallery as an urban corner or square where people meet or pass in constant movement. Using the space as they did, the musicians took literally Terry Riley’s observation in his performance directions that “some quite fantastic shapes will arise and disintegrate as the group moves through the piece when it is properly played,” and they made this 50-year-old cornerstone of minimalist composition very much their own.

BANG ON A CAN ALL STARS WITH SHARA WORDEN AND THE BANG ON A CAN FESTIVAL STRING ORCHESTRA CONDUCTED BY BRAD LUBMAN: “THE MUSIC OF DAVID LANG”
Saturday evening was given over to a formal concert in the Hunter Center of work by one of Bang On a Can’s founding composers, Pulitzer Prize-winner David Lang. “Pierced,” the first piece, was almost two works in one, with the trio of Saratoga Springs native Ashley Bathgate on cello, Vicky Chow on piano and percussionist David Cossin arrayed in front of a 17-member chamber orchestra that was drawn primarily from the festival students joined by new music super-star violinist Todd Reynolds. Soloists performing with an orchestra usually have choice parts that bring out the work’s themes while showing off the skills of the highlighted individual; in “Pierced,” however, Lang set soloists and orchestra in productive opposition, as if he had written two separate pieces that nonetheless engage and supplement one another. Within that supplementary opposition could be heard some signature Lang moments – fondness for sudden, percussive punctuations and dissonance that pushes the listener to find beauty in something harsh and unpleasant.

If dissonance is your signature, sweetness is surprising, and the program’s second piece, “Sunray,” was a sweet evocation of its namesake. The piece was a little light, but it gave the Bang on a Can All Stars – Bathgate, Chow, and Cossin joined by Ken Thomson (also of the punk/jazz collective Gutbucket) on clarinet, guitarist Mark Stewart (who, when not with Bang On a Can, is touring with Paul Simon, or backing up the likes of Bob Dylan, David Byrne, and James Taylor) and Schenectady native Gregg August on bass – a chance to shine.

In the final work, “Death Speaks,” sweetness joined the sinister in a set of five songs that Lang culled from Schubert’s poetry. I confess that I find art songs both too mannered and too earnest. Earnestness has a tough time these days, when irony rules pop culture and audiences can accept strong emotions only if they’re filtered through cynicism, and Lang acknowledges that “Death Speaks” is a throw-back to the classical tradition. But despite myself, I was drawn into the piece with the realization that there was something profound in the lyrics Lang constructed from snippets of Schubert, as conveyed through the voice and presence of Shara Worden from the indie band My Brightest Diamond. Death won’t overpower us like a hungry zombie; it will seduce us in ways that none will want to resist.

The Bang On a Can Music Festival continues at MASS MOCA in North Adams with daily concerts through Saturday (August 2), including a performance by Wilco drummer Glenn Kotche at 4:30pm on Friday (August 1), and the closing, six-hour marathon concert beginning at 4pm on Saturday, featuring Steve Reich and Glenn Kotche. “I was a double,” an art exhibition that David Lang co-curated with Ian Berry, and for which he composed a sound installation, is currently on exhibit at Skidmore College’s Tang Teaching Museum in Saratoga Springs through January 2015. 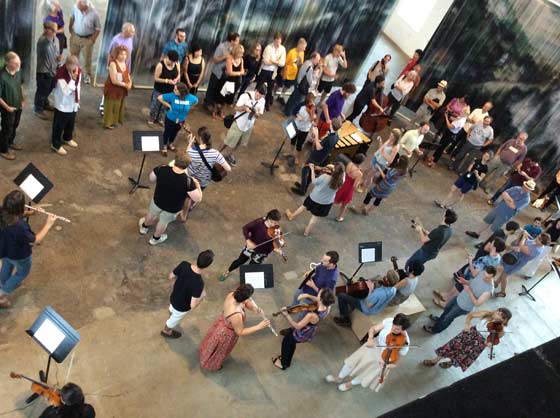 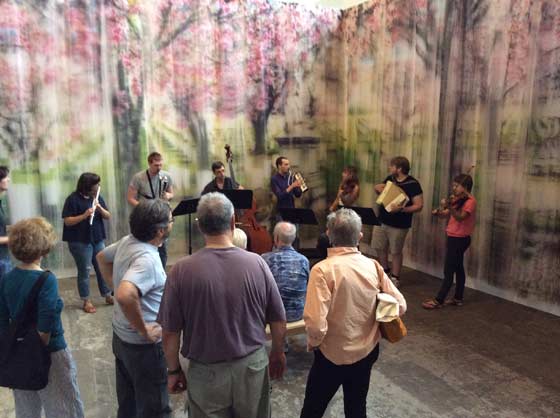