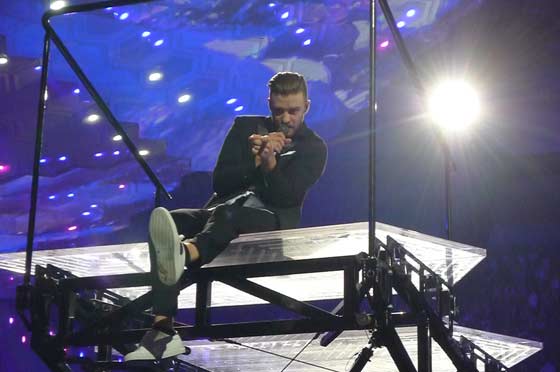 Maybe it was seeing Justin Timberlake so soon after Paul McCartney, who had electrified the sold-out Times Union Center crowd 11 days earlier with three emotionally powerful hours of Beatles, Wings and solo songs.

But something about the first portion of Justin Timberlake’s sold-out show at the Times Union Center just felt flat, even though the devoted JT fans who filled the arena were primed to scream every time the pop heartthrob glanced out into the audience or busted a flashy dance move. Yes, it was an estrogen fest.

The show started with Timberlake and his army of musicians, singer and dancers rising up from underneath the stage — in front of JT markers that looked like gravestones — for the soulful first number, “Pusher Love Girl,” the opening track from the singer’s latest release, The 20/20 Experience.

Although he followed with “Rock Your Body” and “My Love” — two surefire club hits — they both felt surprisingly lethargic. A too-dark stage set maybe, or an arena show performed too many times without variation. Or maybe Timberlake’s slickness just felt less than genuine after having seen McCartney, who sang “The Long and Winding Road” with heart-choking emotion, as if he wrote it yesterday. Totally unfair comparison, I know.

The show did pick up right before the intermission, during the light-hearted “Summer Love” and the love ballad “Until the End of Time,” the latter featuring Timberlake at a white grand piano on the lip of the stage, as the arena lit up in a sea of cellphones.

The second set redeemed the first, with changes in the stage set helping to uplift the mood. Timberlake played acoustic guitar on the alcohol-themed “Drink You Away” in front of a backdrop of smoke, before launching into “Let the Groove Get In,” a monster of a dance tune that recalls the Caribbean vibe and lyrics of Lionel Ritchie’s “All Night Long” while also referencing (ripping off?) both Michael Jackson’s “Wanna Be Startin’ Somethin’” and the coda from the African disco song “Soul Makossa” that Jackson got sued for lifting.

A great tune, nonetheless, one that JT and his four backup singers performed on a catwalk riser that traveled the length of the arena over the heads of fans. JT is highly talented for sure — a pop star who can sing, write, produce, dance, act and do comedy.

The second set highlighted the diversity of his skills, during which he performed Elvis Presley’s “Heartbreak Hotel” on acoustic guitar, melded a cover of Michael Jackson’s “Human Nature” with his own “What Goes Around…Comes Around” and raised the roof on a funk jam medley of Kool & the Gang’s “Jungle Boogie,” his own “Murder” and Bell Biv DeVoe’s “Poison.”

Timberlake’s influence on the dance-floor is undeniable, and he started his two-song encore with “Sexy Back,” surely one of the most irresistible dance hits of the last decade.

SECOND OPINIONS
Greg Haymes’ review at The Times Union
Excerpt from David Singer’s review at The Daily Gazette: “During the back end of the night, a walkway that spanned the width of the sold-out floor moved from the stage to the back of the arena, carrying Timberlake and four vocalists. The skywalk hovered above the audience on the floor while they performed. He then came down a long flight of steps to a tiny stage in the middle of the floor, where he shook hands, then sang and danced to ‘Heartbreak Hotel.’ While this was the most fun of the night, he was surprisingly weak in singing. No matter, the audience happily screamed through it. And, of course, ‘Suit and Tie’ and ‘Mirrors’ to close the night. Timberlake is all business out there. He knows all eyes are on him, and his presence is captivating. Every move counts — including his occasional moments of no movement — and he knows this. He takes himself seriously up there and comes off as endearing while doing it. The show moved fast, the songs came quick and often followed without gaps. The lights and dancers never stopped, a perfect show for audiences with short attention spans and busy with their phones.” 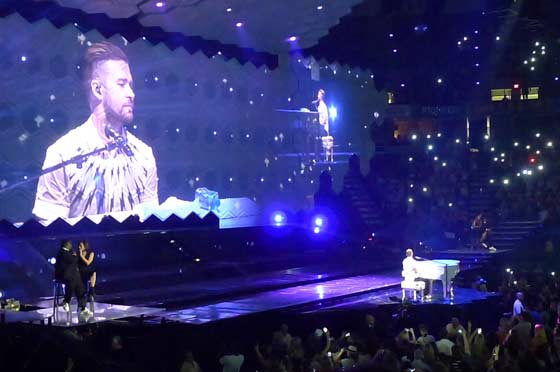 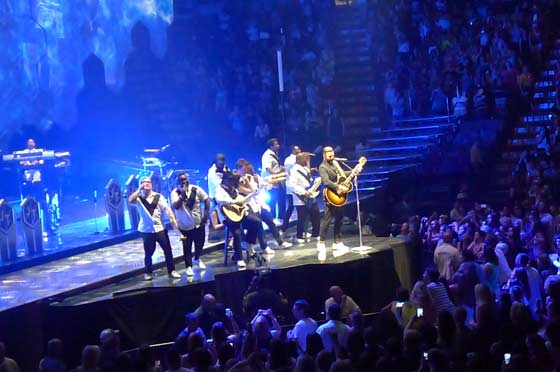