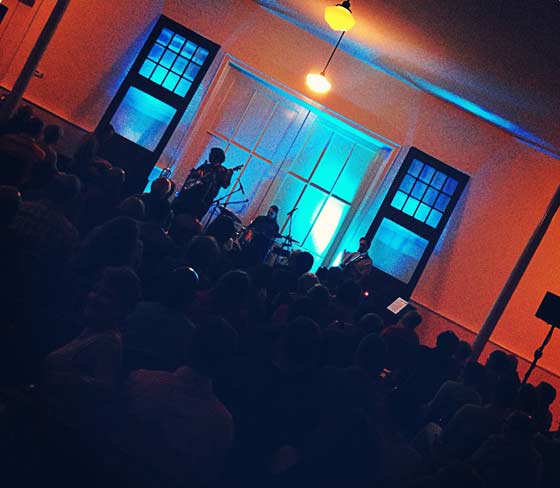 I have an ironclad rule: NEVER go into downtown Saratoga Springs when the Flat Track is open. However, ironclad rules are made to be sold for scrap and melted down – particularly when I’m offered the chance to check out both the Brubeck Brothers Quartet and one of the most striking concert spaces the Spa City has ever seen.

A Victorian Gothic church built in 1871, Universal Preservation Hall has been under various stages of rehab since the start of this century. The main hall needs to be seen to be believed: We’re talking a real cathedral ceiling, with flying buttresses that will take your breath away and a huge slab of gorgeous exposed brick where the church organ used to be. There’s plenty more work to do (HVAC still needs to be installed – something that became patently obvious as the evening went on), but given the commitment and energy of the board members and volunteers I met on this evening, there’s no doubt in my mind that it’s going to get done.

The show happened in a beautiful wood-floored downstairs space with huge salvaged wood-and-glass doors flanking two white sliding doors swathed in blue light. Although there was no raised platform for the band to play on, the overall effect was that of a proscenium stage. The lighting was limited to the lamps hanging from the ceiling, but that only made it feel like you were attending a concert in your local church basement… except the band was the Brubeck Brothers Quartet, and they were on their game from the first notes of the in-the-clear bass solo multi-instrumentalist Chris Brubeck played to open “Dance of the Shadows.”

Although the Brothers have played Skidmore’s Zankel Music Center relatively recently, most of Chris’ appearances in this area have been with his jazz/folk/blues trio Triple Play. As such, it was terrific to hear this bright, light-drenched music being played in these parts. “Dance” is a mid-tempo samba off the Brothers’ 2008 disc Classified (which the group returned to several times during the night), and it lets pianist Chuck Lamb and guitarist Mike DeMicco get their juicy chops sizzling nicely. Lamb got shoulders shaking throughout the SRO crowd, while DeMicco laid down a tight hollow-body sound that kept the piece bouncing while adding steel to the overall product. Drummer Dan Brubeck can surely drop the bomb, although in deference to the space’s ringing acoustics (“This is a very live room,” Chris said at one point), Dan used brushes for most of the evening; even so, his muscular ride-out solo on “Dance” was only a taste of what was to come.

Now, most second-generation players try to avoid being associated with their parents, particularly if they’re undeniable legends like Dave Brubeck. Chris and Dan went the other way, and their affection for their father radiates from their versions of both classic and obscure Dave tunes on the 2012 release LifeTimes. So the music most of us grew up lives through the Brubeck Brothers Band, which is all good. But more than that, Chris also provides wonderful backstory in concert while the overall group continues the music’s necessary evolution.

For instance, you might not have known that the bubbling world music-influenced “Jazzanians” came from Chris and Dan’s brother Darius’ creating the first formal jazz-studies program in South Africa. You might have known “Kathy’s Waltz” was written for Chris & Dave’s sister, but you may not have known about her dancing across the living room of their Connecticut home, dressed in a pink tutu. Maybe you’re familiar with the mammoth blowout “Blues for Newport,” but had you heard that Dave essentially “wrote” that piece five minutes before he took the stage with bari-sax star Gerry Mulligan and played the show that became the killer live album The Last Set at Newport? Lamb struck the perfect balance between soft and savory on “Waltz,” while “Newport” was a delightfully forceful reminder that Dave Brubeck could rock out when he was in the mood.

But again, these and the other classic Dave pieces – like the gorgeous “In Your Own Sweet Way” and the swinging “Marian McPartland” – were not simulations or tributes; this group has a definite personality, and both Chris and Dan are tremendously talented in their own right. So not only did the band put their own individual and collective stamps on these pieces, the pieces showed the progression jazz needs to go beyond being mere repertory. The blues sections of “Blue Rondo a la Turk” were deeper and more delicious than I’ve ever heard them, while the group’s fearless treatment of the encore “Take Five” made it the epic it should be: Lamb’s attack had more than a hint of McCoy Tyner, DeMicco’s guitar made Paul Desmond’s renowned melody line live and breath, and Dan’s bombastic solo had the ghost of Joe Morello smiling its ethereal ass off.

While the brothers Brubeck serve their father’s music eminently well, I’d still like the Brubeck Brothers Quartet to be known more for their own effervescent compositions than for their treatment of the Dave Brubeck catalog. That said, this was one of the best summer nights I’ve spent in Saratoga Springs, and the crowd’s constant cheering through both sets (not to mention the two standing ovations they gave the group at the end) tells me I’m not alone in thinking that.

UPCOMING: Next up on the LIVE! Music Series at the Universal Preservation Hall in Sarataoga Springs is London-based Saratoga-native, jazz clarinetist Giacomo Smith and his band at 8pm Saturday, September 6. Tickets are $20 in advance; $25 at the door.