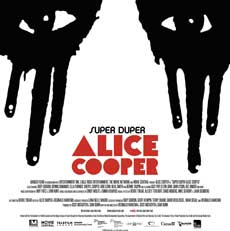 “Super Duper Alice Cooper,” the theatrically released documentary now out on DVD, tells the tale of Vincent Furnier and his transformation into Alice Cooper, one of the biggest rock stars in the world.

Using archival footage, tons of vintage photos and commentary by the likes of Alice Cooper Group bassist Dennis Dunaway, manager Shep Gordon, super-groupie Pamela Des Barres, contemporaries Iggy Pop, Wayne Kramer, Elton John and Alice himself, the movie goes from Vince’s beginning, born in Detroit, but raised on Phoenix, AZ a preachers son, to the band’s start as Beatles wannabes the Earwigs, the name changes; the Spiders, the Nazz and eventually – with help of a a ouiji board – the Alice Cooper Group, a sinister, long-haired rock and roll band that changed the face of theatrics in rock music.

The film moves quickly from the early days to the band’s escape to LA, where – with the help of the notorious GTOs girl group and their introduction to Frank Zappa – they began threatening hippies on the Sunset Strip, to their move to Detroit were the group of oddly dressed misfits found a spiritual home and honed their act into the most visual and shocking of the time, to the making of their first hit the iconic anthem, “Eighteen.”

One of the first bands to break away from the hippie uniform of blue jeans and blues jams, the band developed a following of youth from the “lunatic fringe,” firing a shot against the counter-revolution and opening up a whole new generation, not a love generation, but one built on sex, horror, violence and, yes, some great rock ‘n’ roll along the way. It’s all there, the stories behind the dead chicken, the guillotine, the snake, panties as album dust sleeves, the drugs, massive alcohol consumption, Vince becoming consumed by the character of Alice, meeting Salvador Dalí, the break up of the original band and, oh yeah… even some about the music.

The biggest drawback of the movie is the fact that it didn’t delve more into the music, and the fact that the original Alice Cooper (along with producer Bob Ezrin) pumped out some of the most kick-ass rock and roll of the time. With the exception of the songs “Eighteen” and “School’s Out,” the epic albums of “Love It to Death”, “Killer”, “School’s Out”, “Billion Dollar Babies” and the awesome tracks they contain are not even mentioned.

Another glaring omission is no mention whatsoever of original ACG guitarist Michel Bruce who wrote, or co-wrote, some of the bands finest songs. I assume he did not want to be involved in the project, but to have the author of “No More Mr. Nice Guy” and “Be My Lover” totally written out was just not right.

Of course the story continues after the demise of the original band, through Alice’s up-and-down solo career and his climb into Hollywood stardom hanging with tinseltown elite and rock royalty. Some of the most interesting insights come from song writer Bernie Taupin on his friendship with Alice and their joint struggles with substance abuse. Alice on “The Tomorrow Show” clip is haunting, as he appears as a coked-out skeleton of death.

But all is well that ends well as Vince, clean since 1983, gets through it all and continues his career decades on gaining new generations of followers along the way.

For Alice Cooper completists, this flick is a fun trip back, though it all pretty much that has been told or seen already. But for the novice fan or students of rock history it’s a good documentary of a pioneering rock n roll star. My advise: give it a view, but pull out the albums and give them a listen to get the big picture of Alice Cooper.

Alice Cooper steps into the spotlight at the Saratoga Performing Arts Center in Saratoga Springs tonight (Tuesday, August 26), performing between opening act the Raskins and headliners Motley Crue. The concert is scheduled to start at 7:30pm.

518 Film Network to Host Female Filmmaker Showcase at The…