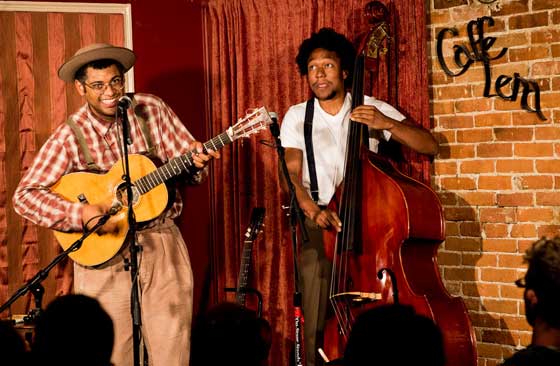 Is there anything that the multi-talented Dom Flemons can’t do? And do well…

He’s been going it alone since parting ways with the Grammy Award-winning black string band the Carolina Chocolate Drops last year, and if you were worried about his ability to captivate a crowd without Rhiannon Giddens and the rest of his former CCD bandmates, worry no more. Earlier this month, Flemons made his Caffe Lena debut in support of his new solo album, Prospect Hill, proving beyond a doubt that he was thoroughly capable of wowing a full house on his own.

Flemons is the complete package as a performer – a stellar musician on at least a half dozen instruments (guitar, four- and six-string banjos, harmonica, bones and a pan flute-related instrument called the quills); a thoroughly engaging, charismatic all-around entertainer; and a straight-A student of the music, who offered insight and educational background on a wide variety of the songs (and the songwriters) that filled his songbag.

Not surprisingly, he focused on the songs from his new album, serving up 10 of the disc’s eclectic 14 songs. He shifted gears effortlessly from the ragtime inflections of Gus Cannon’s “My Money Never Runs Out” (which he introduced as “a fantasy number, of course”), the rhythm & blues original “I Can’t Do It Anymore,” the 1928 female empowerment ode “It’s a Good Thing” (“I call it ‘old time hip-hop'”), the zippy New Orleans jazz of “Til’ the Sea Runs Dry,” the straight-up folk of “Too Long I’ve Been Gone” and the jaunty hokum number “But They Got It Fixed Right On,” which featured some free-wheeling scat singing.

And as it turned out, Flemons wasn’t completely on his own. On a half-dozen selection throughout the night, stand-up bassist Brian Farrow accompanied him, especially strutting his stuff on a rompin’, stompin’ rendition of Sonny Boy Williamson’s bouncy blues, “Polly Put the Kettle On,” which also featured some solid vocal support from Farrow.

And though at times Flemons played the part of a musician from a long-lost era, he certainly didn’t take a dry, academic approach to his musical (and personal) history lessons. After playing an absolutely delightful “Stovepipe Blues” on a vintage custom-made banjo with a gigantic 18-inch diameter head, he noodled around a bit on Led Zeppelin’s “Stairway to Heaven” and Creedence Clearwater Revival’s “Down On the Corner.”

He’s a superb singer, too, subtly altering his vocal delivery to match the songs he sang – stretching from his a cappella treatment of Henry Thomas’ “Arkansas” to the impeccable yodeling during Jimmie Rodgers’ “My Little Lady” to the howling blues variation on Ma Rainey’s “Yonder Comes the Blues.” And midway during his second set, he also offered some short but devastatingly accurate vocal impersonations of Eric Andersen, Dave Van Ronk, Phil Ochs, Bob Dylan and Van Morrison.

But Flemons is unquestionably his own man, a major talent with an ear to to the traditional musics of the past and an eye to the bright future that stretches out before him. 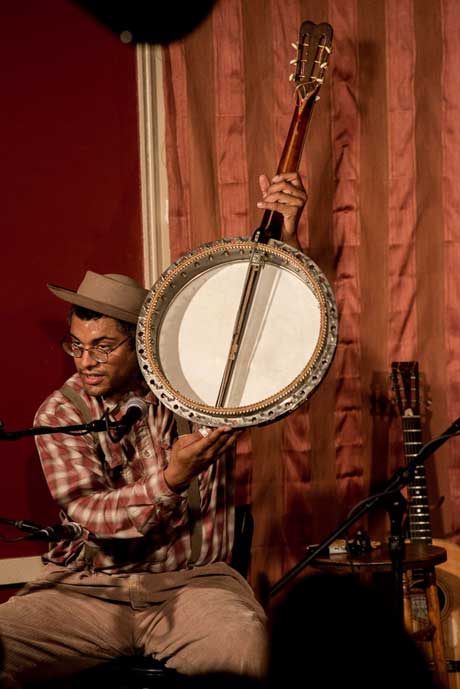 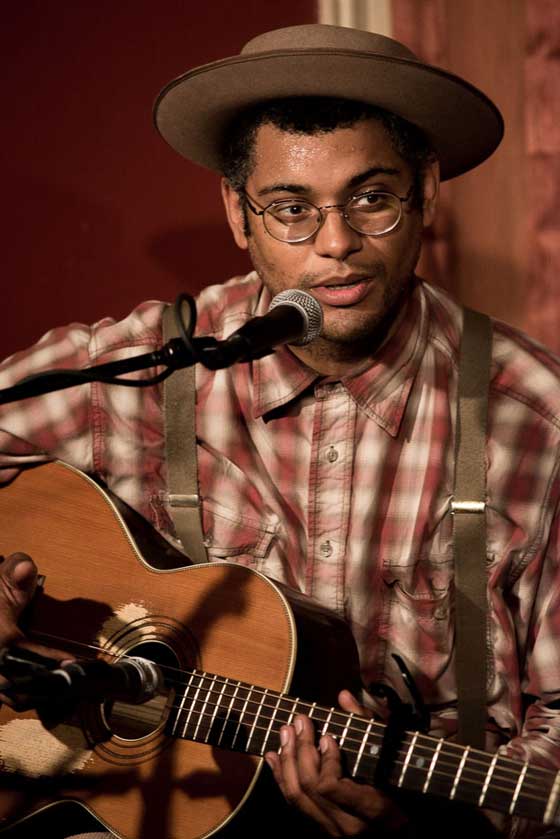