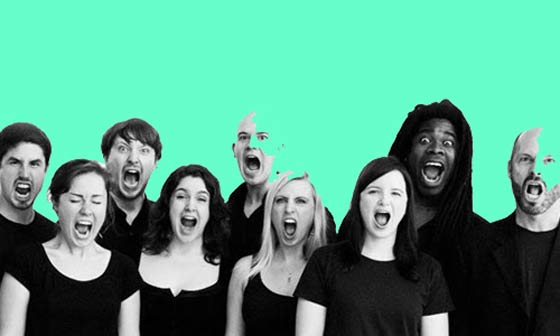 Upon receiving a 2014 Grammy Award for “Best Chamber Music/Small Ensemble Performance,” Roomful of Teeth director Brad Wells said, “We wouldn’t have this album without our work at MASS MoCA.”

You can hear them in the open air courtyard space at MASS MoCA in North Adams on Friday (August 29) at 8pm. Listen for Hindustani and Persian singing styles, Ritornello with music and film by vocalist and Pulitzer Prize winner Caroline Shaw, and compositions by MASS MoCA and FreshGrass favorite, Sam Amidon.

On the heels of the success of its self-titled debut, Roomful of Teeth has been in residency at MASS MoCA since August 18 to explore different vocal techniques and create new groundbreaking work with a roster of guest composers. The group collaborates with American roots singer-songwriter and Vermont native Amidon, a virtuoso in the indie music world. Amidon reinvents traditional songs and contemporary hip-hop covers on guitar, banjo and fiddle and delivers them with eerily deadpan vocals that both charm and unsettle. According to Pitchfork, Amidon’s performances “meld the rural and the urban, the organic and the synthetic, the oral tradition and the written score.”