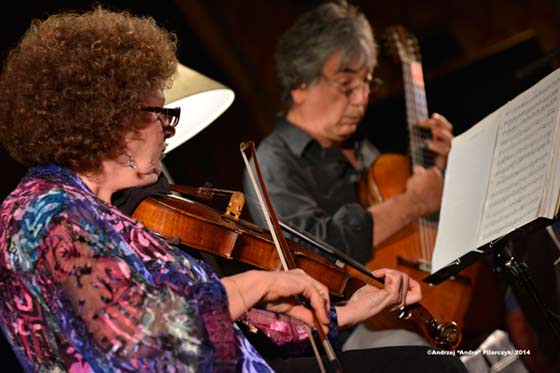 The first half of this New York City-based chamber duo’s recent performance at Schroon Lake’s Strand Theater was a mix of 18th century works by Christian Gottlieb Scheidler and Mauro Giuliani. But right in the middle of the repertoire during the first half of the concert was Peter Schickele’s “Windows,” composed in 1966. Of course, Schickele’s alter ego was the comedic P.D.Q. Bach, a fictitious younger relative of the great Johann S. Bach, part of that historical German classical-music triumvirate – Bach, Beethoven & Brahms – that still influences classical musicians today.

After a brief intermission, the second set kicked off with more Mauro Giuliani, followed by a contemporary nod to the late jazz and classical Argentinean legend, Astor Piazzolla. His composition, “Cafe 1930,” caused more than a few toes to tap the rhythm of the composition soulfully interpreted by violist Louise Schulman and guitarist Bill Zito.

Zito sat under the spotlights and tuned his acoustic classical guitar for two pieces of solo virtuosity. Schulman walked off the stage with her 16th century hand-crafted viola and joined the audience for a listen. The room took on a different atmosphere with two Spanish classical compositions by Enrique Granados and Isaac Albinez, both 19th century composers, that made Zito’s fingers fly up and down on the fretboard shaping a tonal spectrum that encompassed the dynamic extremes of sound from gentle subtlety to aggressive arpeggios.

The last two pieces were written by Maurice Ravel and Jacques Ibert. The interplay between the viola and guitar were superb and at the end brought on a standing ovation and a few minutes of hardy applause as the two left the stage to meet and greet everyone in the lobby of the Strand, where they signed copies of their most recent recording for the internationally revered Dorian record label, An Italian in Vienna.

The Strand Theater has stood in downtown Schroon Lake since the early 1920s. It’s inner decor, according to The New York Times, is one of the most intact and original Art Deco movie theaters in North America. Until last year, it screened current movies during the summer season for those who live year round or vacation in the town of Schroon Lake (the forgotten lake, just a little north of Lake George).

Why no movies no more?

Well, the powers that be in Hollywood decided that digital was the only way to go, and films are no longer sent to movie theaters anywhere in the USA, including this small gem in Schroon Lake. In the last year, a dozen cinemas have closed their doors forever. In the Adirondacks, they could not afford the conversion costs from film to digital (around $80-$90K) to continue showing movies.

The Strand’s proprietor was at a crossroads.

To close the Strand forever, after putting in hundreds of hours and thousands of dollars into interior renovations, would have been heartbreaking for owner Larry MacNamara after all his efforts. He had put his heart and soul into renovating and later running it. He couldn’t throw in the towel. Not now; not after all that.

So he rolled up his sleeves and went to work.

The first thing MacNamara did was to heed his wife Liz’s long-time advice and convert the front of the theater into a small and intimate performance space by building a small stage. He painstakingly used different woods, special screws, glue and paint to keep it acoustically dampened, but also, keep it in the Art Deco style the theater has been known for.

Once finished, it was a matter of bringing in the talent to fill the stage and attract an audience while MacNamara still navigated the financial avenues for raising the money to bring digital movies back to the theater. The only difference now was that the space would be shared by world-class performers and Hollywood films, if the money could be found.

But it was really Hollywood’s lack of concern for the fate of mom & pop cinemas throughout the North Country that baffled MacNamera from the beginning of this possible no-more-film odyssey. Through local contributions, New York State grants and some help from regional film festival grants/donations, the Strand will show films once again starting in 2015 once the digital conversion is complete.

And now that the Strand theater is outfitted for live acoustic music, there is no telling who might perform there in the future.

If it was up to MacNamara – and no budget to restrain him – he’d have Ani DiFranco and Sully Erna (of Godsmack fame) performing on alternate weekends. But back to reality, he is proud to present world-class talents like Bill Zito and Louise Schulman any day of the week. 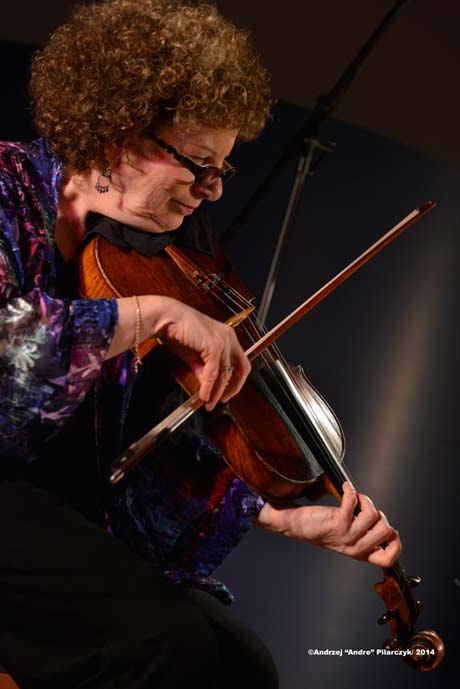 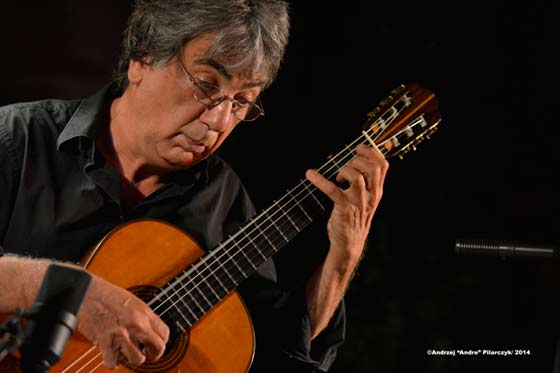 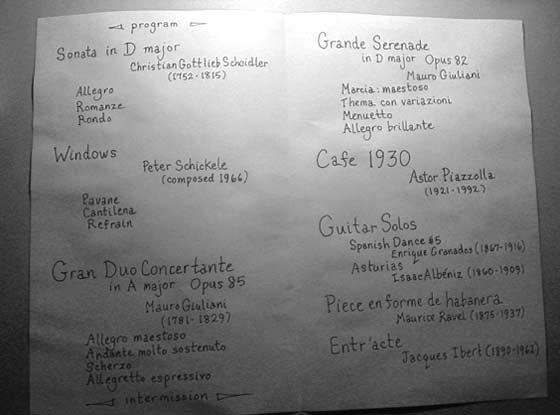