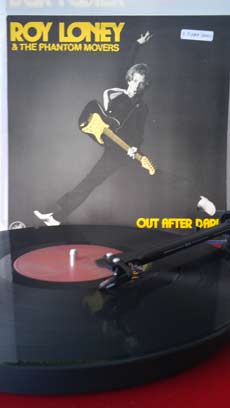 The Capital Land Crate Digger brings you reviews of vinyl obscurities found for $10 or under at Capital District record stores, thrift shops, garage sales and junk emporiums. The vinyl archeologist behind this column is Ross Marvin, an English teacher and music enthusiast who lives in Saratoga County. Ross has over 1,000 pieces of vinyl, is running out of shelf room, and can be found getting his fingers dirty in a box of records near you.

Here’s a little story that sums up the Capital Land record store scene. At the end of July I had my annual record garage sale in Clifton Park and despite ridding myself of several tons of tunes (making my wife immeasurably happy), I was still left with some quality merchandise. Like most serious record collectors, I deal to pay for the habit. So, I took a stack of wax to Troy’s Citizen-of-the-Year Jimmy Barrett down at the River Street Beat Shop in Troy. The always fair Barrett gave me some credit at the store, and before you know it I was pulling out more records than I expected. I felt a heady rush when I came across an extremely clean promo 12” single of legendary Flamin’ Groovies frontman Roy Loney doing the Elvis hit “Return to Sender”.

Norton Records co-founder Miriam Linna probably said it best about the Groovies that they were the American Rolling Stones, raised on Sun Records rather than Chess. It’s a fitting description of the Groovies early records like “Teenage Head” and “Flamingo” that sound more ’50s rock and rockabilly informed than blues derived. When Loney left the band in the early ’70s, he became a record clerk in San Francisco, but never exactly stopped recording, making several records on the Solid Smoke and War Bride labels as Roy Loney & the Phantom Movers. The Phantom Movers may well have been called the Phantom Groovies as they included original Groovy drummer Danny Mihm, and sometimes-Groovy lead guitar player James Ferrell. The group was rounded out by Maurice Tani on bass, and Nick Buck on keyboards, with Loney belting out snarling lead vocals and acoustic rhythm guitar.

To get back to my meandering story, I was excited to find anything related to the Groovies as their records aren’t always easy to come by (outside of represses) in our region. I rushed home, popped the single on the stereo, and it wowed me. Like many collectors, I go through listening phases. For about a year, I was hooked on power pop. Big Star, Alex Chilton solo projects, Shoes and Paul Collins’ Beat were my obsession. Last year, I pretty much listened to Guided by Voices and the band’s immense lo-fi catalogue every day of the year. Other phases included 80’s college radio, first wave NY punk, garage rock, classic country and West Coast DIY punk.

When I found myself in Barrett’s Troy store, I was sick with a heavy case of rockabilly. Reverberations of Johnny Burnette, be-leathered Gene Vincent, hill-a-billy Charlie Feathers and skinny Elvis had my motor going. Loney’s 12” was a more modern approach to this sound and put my one-track mind into zombie mode. MUST FIND MORE ROY LONEY. MUST GO TO OTHER RECORD STORES DROOLING AT THE MOUTH LIKE A FIENDING STOOGE…

So, as summer came to a close I looked to save one last vestige of fun, at — where else? Jim Furlong’s Last Vestige Music Shop on Quail Street in Albany. After digging through their often-satisfying rockabilly section and just-in-bins, I checked out the Flamin’ Groovies name card in the standard alphabetized rock section, and lo and behold! A pristine copy of the Roy Loney & the Phantom Movers “Out After Dark,” the same LP the 12” single from the Beat Shop was promoting.

And so, after much meandering, the moral of my story: Our two most established record purveyors in Capital Land are not so much competitors as they are bookends, brothers-in-arms, harmonizers. What one doesn’t have, the other might. It puts hope in my heart.

And was the price ever right? At $6.99, it was a deal. I even had one of those handy punch cards filled up (for every $100 you spend at Last Vestige on used records, you get $20 to spend in the store, which basically means everything is always 20% off if you shop there enough — which you should). You can’t even buy a new CD for $6.99 anymore. I rushed out of the store feeling like I’d fleeced Furlong, my record in a brown bag like wino treasure.

While the Groovies early records are often called proto-punk, I think they really are better described as the Stones’ American cousins. Of course, there probably wouldn’t be punk music without Keith Richards, but that’s a discussion for another column. And, while many critics say the Groovies’ “Teenage Head” is better than “Sticky Fingers,” I could never bring myself to be that bold. Unquestionably, though, the Groovies make music that is pure rock and roll. It isn’t loaded with enigmatic lyrics or bogged down by intellectual posturing. It is unadulterated party music, an all out blitz of rocking energy — an equal mix of Chuck Berry and cleaned up, glitzy garage rock. It was music both too late for its time and too early for its time, which is why record collectors love this neglected group. After Loney left, the Groovies, led by guitarist Cyril Jordan became a kind of British Invasion mod act in the late ’70s, making some great records for Sire, but abandoning the real-deal American feel that makes those early records of the late ’60s and early ’70s so great. Loney never abandoned this tradition, and his much-neglected solo albums should be rediscovered by a larger audience.

On “Out After Dark” Roy Loney comes across as a high-heeled, curled-lip Lou Reed, without the Delmore Schwartz-inspired pretense. While the many styles present on the album may drive some to schizophrenia, to my ear each track is filled with the essential ingredients that really cook when mixed down to vinyl. There’s more than a spoonful of rockabilly (the awesome Halloween-themed Jackie Morningstar cover “Rockin’ in the Graveyard”), a heavy dose of Modern Lovers-ish two-chord punk (“People People,” “Neat Petite” and “She Run Away”), ’50s rock (both original “San Francisco Girls” and the Otis Blackfield/Winfield Scott penned “Return to Sender”), a dash of walking dead garage rock (the unhinged “Used Hoodoo” and the wild “Phantom Mover”) and power-pop balladry (“Trophy”). Like many garage rockers, there is a slightly campy element to the record that seems to aspire to be skuzzy and monster-movie low brow. But, even the tracks that don’t stand out would probably sound great in a Quentin Tarantino or Robert Rodriguez movie (“Scum City” would be the perfect black-and-white soundtrack to a “Sin City” car chase). More than any other album, it reminds me of the Velvet Underground’s Loaded. Like Loaded, Loney’s LP is filled with all-killer and almost no filler, but the songs aren’t especially cohesive as a “statement.” “Return to Sender,” which really popped as a single, is a little bit lost here on side one, and the arrangement comes
across as rock and roll lite when compared to the more abrasive and rollicking shuffles that exist on many of the other tracks. Other critics might say that you can almost sing “Sweet Jane” or “Roadrunner” to many of these straight forward rock songs. Ultimately, this might be a record that defies criticism, encourages loud volumes, and would remind people at a party that even in 2014, rock and roll is the best kind of dance music.

Essential Cuts: Neat Petite, People People, Trophy
Best Deep Cuts: Rockin’ in the Graveyard, I Love It
Scratch and Skip: Scum City — but it has its merits