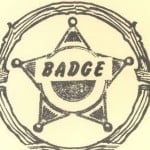 Celebrating 40 years since their debut performance in the fall of 1974, veteran Local 518 band Badge will be playing a reunion show at the Parting Glass in Saratoga Springs at 1pm on Sunday (October 12).

Playing their own blend of country and rock – which they dubbed “North County Rock” – Badge played in music halls and honky tonks throughout the northeast for 10 years before calling it quits in the autumn of 1984. The band featured Jim Barber (bass & vocals), Jim Dimmenno (lead guitar), Al Lemery (guitar & vocals), Rick Morse (pedal steel guitar) and Bob Ringrose (drums & vocals).

Badge reunited in November, 2013 for the first time in three decades, celebrating the long overdue release of a CD compilation of the band’s previously unreleased recordings titled Playing in the Band: 1974-1984.

At Sunday’s reunion show, Badge CDs and t-shirts will be available, and all proceeds from merchandise sales will go directly to the Southern Adirondack Musicians Fund. Doors open at 12noon on Sunday, and admission is free.