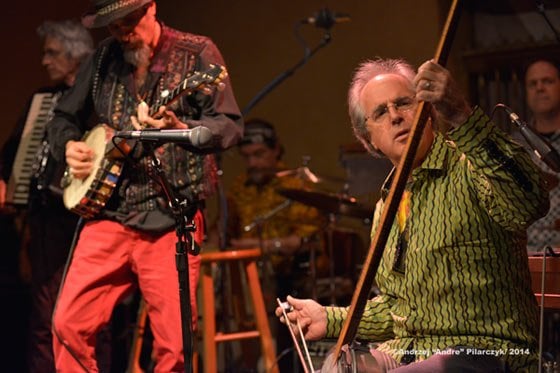 If you want to set off one of my more epic rants, come at me with that old saw about “Smallbany” (“Oh, there’s NOTHING happening here…”), and then step back a few feet so you can watch me turn into the Tasmanian Devil without getting caught in the shock wave. It doesn’t take a lot of looking around to see the wealth of cultural goodness that’s coming to this area on a regular basis; I just wish more people had looked long enough to see TriBeCaStan was playing The Linda, because this eye-crossing music needs to be experienced.

“It’s great to be in Albania!” TriBeCaStan leader/multi-instrumentalist John Kruth enthused in a Borat-quality accent. Then he added drily, “We thought there might be more people in Albania…” The crowd may have been small, but their fervor for what this mammoth group dished out started big and grew exponentially. And I do mean mammoth, both in size and sound: A septet can put a pretty decent strain on The Linda’s limited stage space, and there were so many instruments and amplifiers stuffed onto that space, emcee Michael Eck had to play his opening solo-acoustic set on the floor in front of the stage. Mind you, most of those instruments were only played by two people – Kruth and his partner-in-madness Jeff Greene – but trust me, they all played a part in what I believe is a completely new genre: BIZARRO World Music!

Now, the instrumental makeup of TriBeCaStan did lend itself to regular old World Music, but with TriBeCaStan, there was a Madison Bumgartner-level curve ball in every single tune. The riotous opener “Repo Rodeo” was your basic Texas swing driver… that included Eastern European folk lines, and ended with Kruth adding a touch of Asia on a wooden flute. “Auto Rickshaw” (from the group’s 2013 release New Songs from the Old Country) was inspired by Kruth’s wild ride in an Indian rickshaw, and was composed in that geographic light… with some brutal Hammond B3 sounds from keyboardist Kenny Margolis. “Louie’s Luau” filled the Linda with a tasty NOLA second line rhythm… that had Greene comping on jaw harp while Margolis’ accordion threw Tex-Mex spice into the gumbo.

I tend to dub someone a “multi-instrumentalist” if they play more than their primary axe. The thing is, though, I’m not sure Kruth HAS a primary instrument, because everything he touched turned into divine sound. For “Rickshaw”, Kruth pulled out a Portuguese guitar that looked like something Tyrion Lannister would use as a weapon. Kruth played an electric sitar for “The Charnel Waltz” and the smallest electric mandolin on record during a wicked take on Don Cherry’s “Mopti.” It’s rare to hear anyone play one Don Cherry piece, but Kruth and Greene soloed on Chinese halusi Gourd flutes on the even-wilder “Guinea.” And Greene definitely earned his “multi” tag, too: He may have started out on marimba, but he also played a steel banjo – which he bowed – on the waltzing “Jovanka” (“The lovely wife of Tito,” Kruth informed us), a Swedish nyckelharpa during “Guinea,” and a Caribbean marimbula on a swirling piece Greene described as “an African prayer.”

See what I mean when I say “BIZARRO”?

It definitely helped that the entire group was down with this twisted program. Trombonist Chris Morrow and trumpeter John Turner added both melody and madness to every aspect of TriBeCaStan; Margolis’ electrifying keyboards churned out everything from blues to barrelhouse to straight-up jazz fusion; Ray Peterson served up Stanley-meets-Jaco bass lines that were as funky as his stage outfit; and percussionist Boris Kinberg (the inspiration for the punk-Czech closer “Boris Love”) went as far as bopping across the stage during “Jovanka” while playing a frottoir.

To be fair, “bizarro” diminishes the blindingly intricate monster that is TriBeCaStan. In fact, Kruth is pretty damn intricate himself: He’s written biographies on Roy Orbison, Rahsaan Roland Kirk and Townes van Zandt, and is working on an examination of the Beatles seminal album Rubber Soul in commemoration of its 50th anniversary as the point when the Fab Four started changing the game. The Townes Van Zandt link is the most relevant one here, as Kruth joined Eck during the opening set for three killer Townes tunes that were Texas acoustic blues at its finest. Eck informed us that the mandolin Kruth played on “To Live Is to Fly” was built on September 16th. Eck then added, “And he found more notes in it than I have so far!” 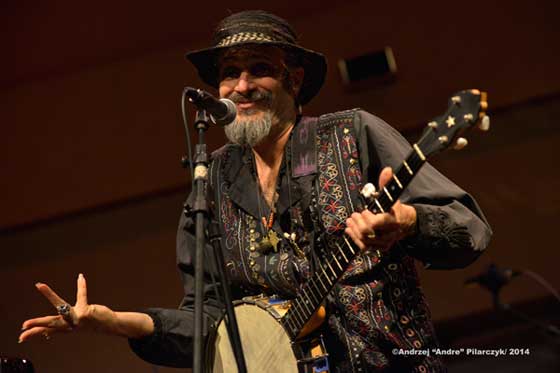 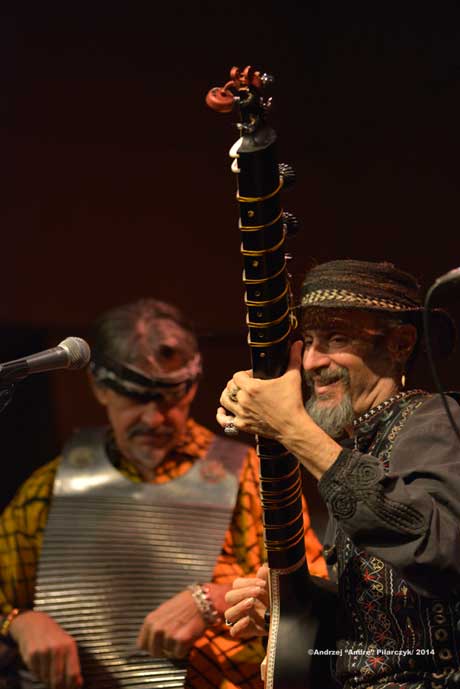 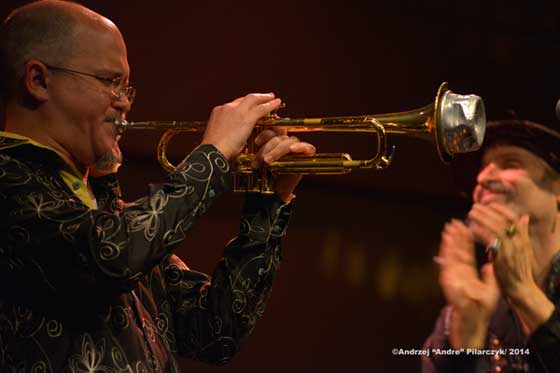 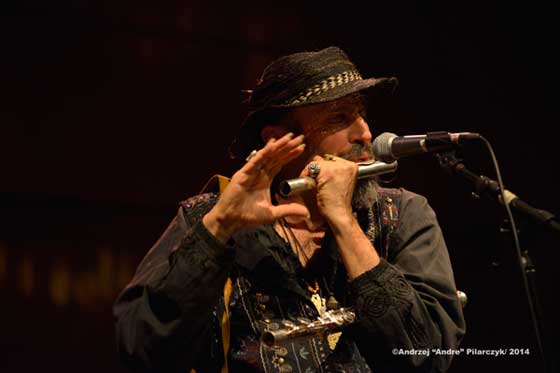 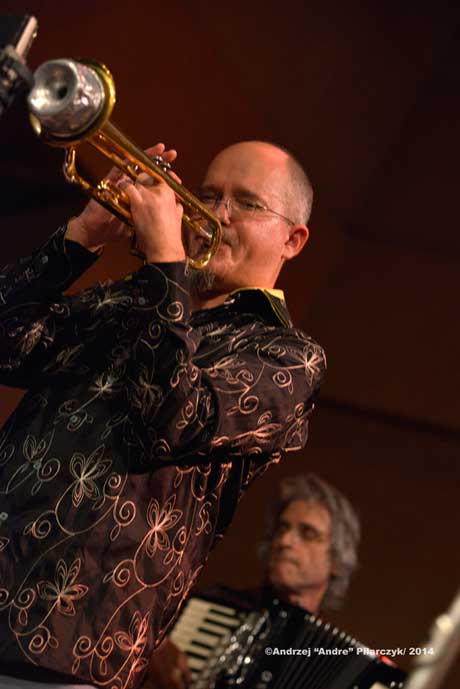 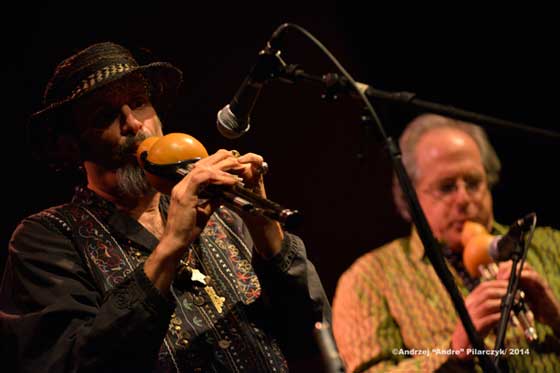 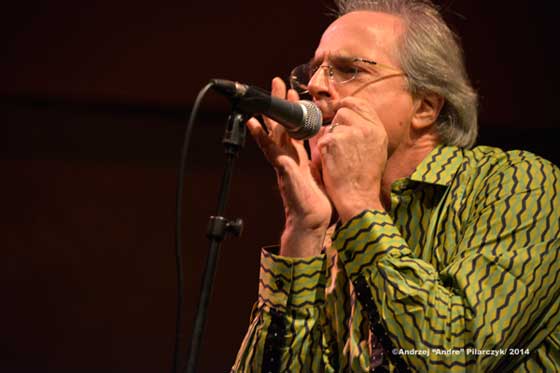 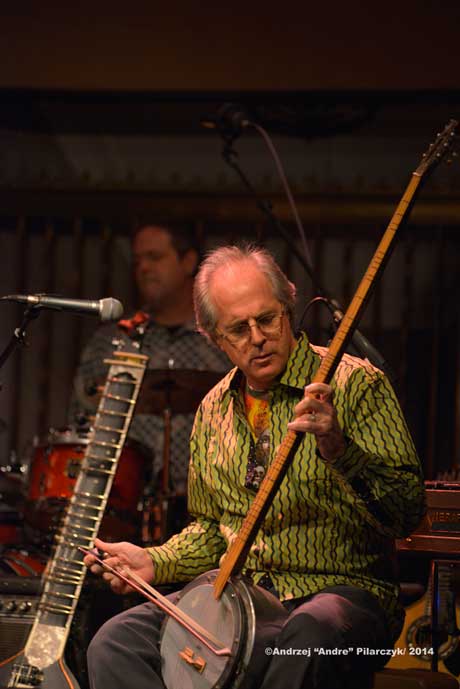 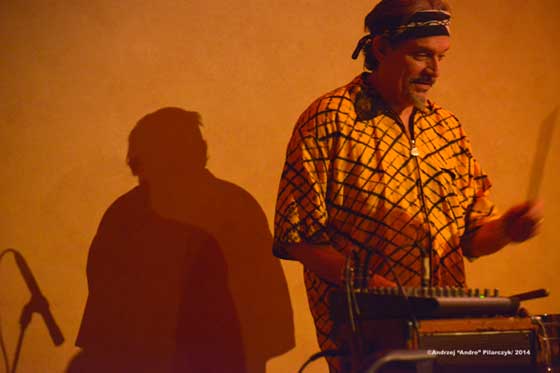