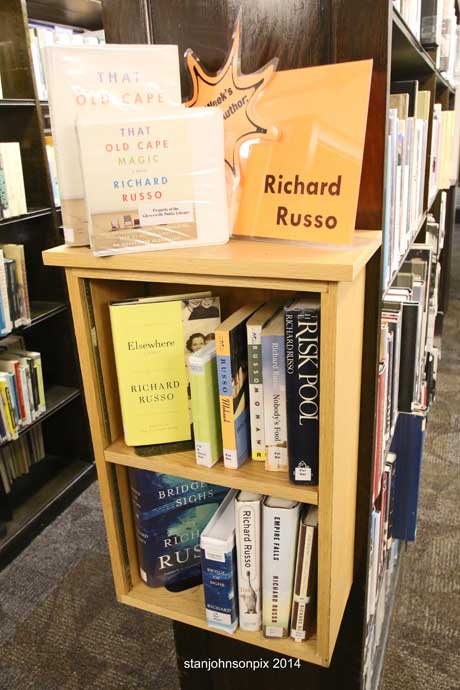 Story and photographs by Stanley Johnson

In a recent Nippertown story by local performer Erin Harkes, she wrote about Richard Thompson and how he was one artist for whom she would hold open the date of his show so she could be sure to go.

I’m the same when it comes to certain writers, as in book authors. When I heard that Pulitzer Prize-winning writer Richard Russo was returning to Gloversville, I had to be there.

Russo, the author of about 10 books, won the Pulitzer Prize in 2002 for “Empire Falls.” Several of his books, including “Mohawk,” “The Risk Pool” and “Nobody’s Fool” (which was made into a 1994 film starring Paul Newman), were fictional but accurate depictions of his youth in Gloversville, a small mill town on the northwestern fringe of Nippertown. (Okay, maybe it’s beyond the fringe.)

Aside from being a big fan, the reason I had to be there was because that’s also where I was born, raised and fled from after high school. Russo, after a long absence, returned to help the Gloversville Public Library with a campaign to bring the 110-year-old Carnegie building into the 21st century.

The library was one of 107 libraries built in the early part of the last century by Andrew Carnegie. The restoration drive has so far resulted in about $2 million of the projected $7 million needed to update the boiler, add air conditioning and construct an elevator for handicapped access beyond the first floor. New windows have already been added.

Russo spoke about how the library was crucial to setting him on the path to being a writer. He said he was delighted to find that security was lax when, as a twelve-year-old, he made break from the kid’s room to the adult room. “The stacks of books seemed so high that I could get lost there,” he said, drawing comparisons to the narrow streets hemmed in by high walls in Venice as in his book “Bridge Of Sighs.”

Russo said he could investigate books that he probably couldn’t bring home by writers like Edgar Rice Burroughs and H. Rider Haggard, which sported lurid covers and were filled with action. “It was fun,” he said, noting that he hoped young people can still discover the fun in libraries.

I don’t remember ever meeting Russo when I was a youth there (he was a few years older) but many of our experiences overlapped. I was turned on to great reading material such as books by Ray Bradbury by the children’s room librarian Esther Tasner. Once out in the regular stacks, I discovered the record section. From this library I found out about Big Bill Broonzy, Johnny Winter and others, who I would nvere have found in the Melody House or Britts Department store record section.

It was also in this library that I had my first experiences with a photostatic copy machine (way better than ditto or mimeograph machines), and this started me on a path to creating my own crude comic books, newspapers and, eventually, underground newspapers.

Later in life, the big reading room with its enormous tables provided me with a place to write term papers while at break from college. Although I haven’t been back to the Gloversville Library in recent years, I continue to use other branches of the Mohawk Valley Library Association in Schenectady and Amsterdam for entertainment. The Schenectady Libary, for example, has a DVD section bigger than any of the closed video stores that used to be everywhere. And no where else can I find audio books at this price, which is, um, free.

Best of all, especially to not-rich people like me, I can get on the internet without having to buy a computer, smart phone or the data plan to service these devices. It may not level the playing field between the have-nots and the have-lots, but what other choice is there?

It was great to find out that Russo is planning a sequel to “Nobody’s Fool” with a book tentatively titled “Everybody’s Fool.” It was also great to meet him, something that rarely happens with my favorite writers unless I’m willing to stand in a long line in a big city. (Stephen King or Dan Simmons in Albany? I doubt it.)

I hope that the Gloversville Public Library achieves its goal. Almost nothing else of my youth remains in Gloversville: my home, my grade school and my church are all just memories. My parents are dead and our graduating class from Gloversville High couldn’t even get enough interest up for a 40th reunion.

But some have managed to keep the Glove Theater alive. Perhaps the same can happen for the library…