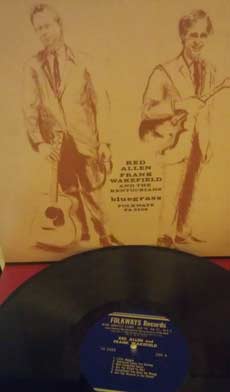 The Capital Land Crate Digger brings you reviews of vinyl obscurities found for $10 or under at Capital District record stores, thrift shops, garage sales, and junk emporiums. The vinyl archeologist behind this column is Ross Marvin, an English teacher and music enthusiast who lives in Saratoga County. Ross has over 1,000 pieces of vinyl, is running out of shelf room, and can be found getting his fingers dirty in a box of records near you.

Well, it’s that flannel shirt time of year. The smell of burning leaves, the drop in temperature, and the death of garage sales makes me question my vinyl sickness: Do I stay in my warm bed, or try to make one last score before the good hunting season comes to a close? Though the thought of a thick newspaper and a home-scrambled breakfast was tempting, I dragged my ass out of bed a couple of Sunday’s ago and made the trek to the sterile conference room of the Albany Marriott for another fine rendition Felix Iavarone’s biannual Rock N Roll Expo.

Record fairs are the ugly step-children of record commerce. Less hip than an independent record store (because they aren’t located in an urbane downtown), and a lot better than a garage sale gamble, the Marriott conference room setting of the Rock Expo looked a lot like the floor of some throwback casino where almost everyone has a wild look in their eye, a shared addiction, and the uneasy feeling that a heavy wallet will quickly be made light if you find a lucky table. Gotta love what I overheard, while digging around my fellow crazies. Said one octogenarian with a horrendous come-over to a dealer: “But, what have ya got as far as polka 45s? Here, I got a list. I mean I gotta find this record, man. Even if you find it someday and want to keep it, you could at least make me a CD.” I don’t even think the dealer had ANY polka, but the guy kept yelling at him about some world-forgotten 19th Century dance music. At least I don’t collect polka 45s, I thought. That makes me less of a nerd. Affirmation! Right…

Last time we sat down to share in a recording adventure I was jonesing for some power pop, but like I said, now it’s autumn: The leaves dropped, real men are chopping up the firewood, and my fridge is full of pumpkin ale and hard apple cider. Though, I have a rock n roll heart, October always finds me on the back roads searching the roadside for some classic country and bluegrass. Give me George Jones on the box and a glass of Tennessee whiskey. Buck Owens and a beer. Bluegrass mandolin and a Guinness. But, like most record stores, the knowledgeable dealers at the Expo weren’t giving this stuff away. They knew their selection — and what a selection it was! Boxes of $100-plus LPs. Cardboard crates filled with $25 45s. Like most record hunts, to find the good, affordable stuff, you have to be willing to put some time in and dig. One of the dealers came from Binghamton, and he must have loaded a C-130 with all the good tunes he brought. Six or seven tables and one helluva large “Folk, International, Hillbilly and Americana” section. Hot diggity, Jethro!

Not long into the search, I found a must-have: Red Allen, Frank Wakefield and the Kentuckians’ Bluegrass on the Folkways label (1964). It was marked $15, but I rolled it into a bundle of other records that I hoped to get for a slightly better deal (which is the usual procedure at these swap meets. Buy one record, pay the sticker. Buy a few and make a deal). The guy accepted my $10 offer on the bluegrass classic, and I told him how glad I was to find a pristine copy of Saratoga Springs-dweller Frank Wakefield’s finest album.

While Wakefield does get treated like royalty at his semi-annual concerts at Saratoga’s Parting Glass (he celebrated his 80th birthday there this summer), more Capital Land folks should investigate the astonishing career of our very own bluegrass legend. Born in Emory Gap, Tennessee, 35 miles from Knoxville, Wakefield grew up in a musical family and first picked up a “tater bug” round belly mandolin at the age of 17. Heavily influenced by Bill Monroe, Wakefield was also an innovator on the mandolin, adapting licks from the banjo and guitar to the mandolin and employing what album producer (the VERY young) David “Dawg” Grisman called “staggering technique” in his comprehensive liner notes for Bluegrass. As is the case with most Folkways releases, the liner notes included are a must for collectors. Blending the erudite with almost mythical music folklore, the notes for this album acknowledge that Allen/Wakefield and company were a veritable amalgamation of nearly all the rural music that reared its head from the 1930s forward.

If the Byrds’ Sweetheart of the Rodeo paved the way for country rock, then you could make an argument that Allen & Wakefield set the ball rolling on the “Newgrass” or “Progressive Bluegrass” of Grisman, Jerry Garcia, Clarence White and Sam Bush. Wakefield’s can’t miss hit is “New Camptown Races.” The unlearned listener might chalk up “Camptown” as a traditional fiddle tune. Without a doubt the lightning speed mandolin, banjo licks and dramatic minor flourishes have become canonical since their more famous treatment by Garcia and Grisman’s legendary bluegrass project Old and In the Way. But, Wakefield and Allen weren’t hippies in 1964 (and neither was Grisman). This is suit-and-tie country, as sermonized on the superbly sung Sunday morning mountain gospel high harmonies on “Are You Afraid to Die?” and “Shake Hands With Mother Again.”

The blend of old and new, innovation and tradition gives this album a palpable tension that defies the predictability of so much bluegrass music (three chords, harmony singing, fast solo, repeat!). If anything, the most shocking numbers on the album are the most traditional because they stand out. The “aww shucks” Mayberry shtick of “Ground Hog” is less convincing than the downright strange Bill Monroe-penned “The Little Girl and the Dreadful Snake.” With a chorus of “I heard the scream of our little girl far way / ‘Hurry daddy, there’s an awful, dreadful, snake’ / I ran as fast as I could, through the dark and weary woods / But I reached our darling girl too late,” this highlight recalls the Old Testament fatalism of the Louvin Brothers’ near contemporary Satan Is Real (1959). The Satan Is Real fire-and-brimstone influence is made even more obvious in the Carl Story-penned “Are You Afraid To Die?” and the traditional “Are You Washed In The Blood.” These old-testament tunes ask very HEAVY METAL questions: Are you afraid to die? Are you washed in the blood of the lamb? Take note Ozzy! Look to country gospel for your next shocking lyrics.

Like all the best C&W or bluegrass albums, it’s not all about repentance on Sunday. There’s the standard “Little Maggie” with its a’courtin’ and a’drinkin’. There’s a nice share of outlaw bluegrass, too. On the ubiquitous “Deep Elem Blues” you “better have 15 dollars / When that policeman runs” and on Davis and Taylor’s “I’m Just Here To Get My Baby Out Of Jail” mama’s willing to “scrub all your floors” and “pawn my watch” to get the aforementioned “baby” outta the slammer. A warning: Don’t overdo it scrubbing those floors if you have a heart condition. In true Appalachian-Shakespeare tragedy tradition, mama dies with her “dear boy” in her arms at the close of the song.

Despite the artful sequencing of the album and the great stories that are a trademark of the best bluegrass and country, the picking really is impressive here and makes me resist the notion that this is a “depressing” spin, despite the dour lyrics on many tracks. Along with Allen and Wakefield, banjo legend Bill Keith (a rare bluegrass northeasterner from Brockton, MA) lends his five-string to several of the tracks, platooning with the versatile Pete Roberts, who doubles on baritone vocals. Tom Morgan and Fred Weiss share bass duties, Morgan taking the low vocal parts on the divine four-part harmonies of the country gospel church.

Some people want a choir of angels waiting at the pearly gates singing “Halleluiah.” If there’s a heaven for me, give me those down-home, back-woods, clapboard steeple-church harmonies. And Red Allen singing lead, all high and lonesome.

TRACK LISTING:
Side 1
1. Little Maggie
2. Somebody Loves You Darling
3. New Camptown Races
4. Are You Afraid To Die?
5. Sweetheart You Done Me Wrong
6. Are You Washed In The Blood
Side 2
7. Deep Elem Blues
8. Ground Hog
9. The Little Girl And The Dreadful Snake
10. Catnip
11. I’m Just Here To Get My Baby Out Of Jail
12. Shake Hands With Mother Again

Essential Cuts: New Camptown Races; Are You Afraid To Die? ; I’m Just Here To Get My Baby Out Of Jail
Best Deep Cut: The Dreadful Girl and the Little Snake
Scratch and Skip: This is a classic… don’t scratch it… let the needle dance all the way to the label.

The Egg Adds ANOTHER New Concert